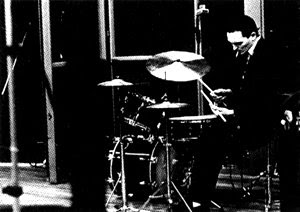 Shortly after The Specials split, band members splintered into several new groups and 2-Tone took on a totally new direction from its old ska roots. The label began releasing more soul/funk singles by new one-off signings like The Higsons, The Swinging Cats and The Apollonaires who released singles. As the mid-80's approached, The Special AKA which at the time consisted only of original members Jerry Dammers and drummer John Bradbury released a few more singles and an album and kept the 2-Tone label open, if in name only. The final release on the 2-Tone label came in January 1986 with the release of Bradbury's JB's Allstars "Alphabet Army".

JB's Allstars was a band founded by Specials drummer Bradbury as a side-project to indulge his love of UK northern soul. The band's day in the sun came when they performed on UK music TV show "The Tube" in 1984 performing "One Minute Every Hour", "Sign on the Dotted line" and a odd US Football themed "Backfield in Motion" which was a single released by RCA Victor in 1984 that did not make the UK charts. JB's Allstars featured Brad on drums, Dee Sharp on vocals, Mark Hughes on harmonica, Jason Votier on trumpet, Robert Awahi on guitar, Steve Nieve (from Elvis Costello & The Attractions) on piano and George Webley on bass.
Here is there The Tube performance from 1984:


Here's a download of the final 2-Tone single "Alphabet Army":

JB's All-Stars - Alphabet Army
Posted by Marco On The Bass at 5:24 PM