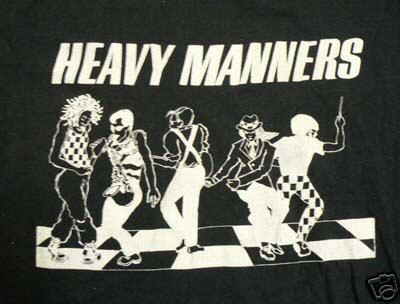 While The Untouchables from Los Angeles are widely credited with being the first U.S. ska band, there were other important bands from around the U.S that emerged in the early and mid-80's: New York had The Toasters, Boston had Bim Skala Bim, Detroit had Gangster Fun and Chicago had Heavy Manners.
Heavy Manners come closest in look and sound to an American ska version of The Selecter highlighted by Kate Fagan's vocals and ripping guitars (take a listen to my favorite "Taking The Queen To Tea"). Throughout the early 80's they built a huge cult following throughout Chicago and the Midwest opening shows for The English Beat, The Clash, Third World, Jimmy Cliff, The Ramones, The Go Gos, Grace Jones and Peter Tosh among others. 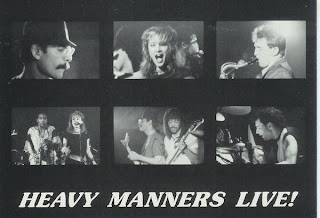 The band's live shows were so legendary, that a gig they played with Tosh during a sold out show at Chicago's famed Aragon Ballroom changed their fortunes. The reggae superstar was so impressed by their live performance and the quality of the band's songwriting he offered to produce a recording session with them. Studio sessions were soon set up in Chicago and Tosh flew in from Jamaica to produce along with his guitarist Donald Kinsey and his engineer Dennis Thompson.

The Tosh produced tracks are now available for the first time as a part of a collection of new and vintage Heavy Manners cuts called "Heavier Than Now." Included on the disc are remastered versions of the band's vinyl singles previously released on Disturbing Records and a five song set. You can purchase the CD here and you can hear versions of the songs on the band's MySpace site.

The band recently reunited earlier this month the play 2 shows in Chicago. If you live in Chicago keep your eyes open for them and check them out if they play again.

Here is a self-produced video they released for the song "Flamin' First".