The Special AKA Live! - Too Much Too Young 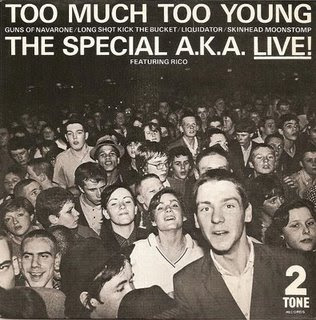 The Special AKA Live! was a live 5-track EP released by The Specials in January 1980 as the third single by the band. The EP featured "Too Much Too Young" (originally recorded on the album Specials) and "Guns of Navarone" recorded live in London and "Skinhead Symphony" - a medley of "Long Shot Kick De Bucket", "The Liquidator" and "Skinhead Moonstomp" - which was recorded at Tiffany's in Coventry.

Lead track "Too Much Too Young" is based on the 1969 song "Birth Control" by Lloyd Charmers. It is sometimes wrongly stated that the song was banned by the BBC due to mentions of contraception in the lyrics. This is not true - however, when the song's promotional video was featured on Top of the Pops, it was cut off just before reaching the final line, "try wearing a cap".

The song became an instant smash topping the UK singles chart for two weeks in January 1980. It became only the second EP to top the chart and was also the first live recording to top the chart since Chuck Berry's "My Ding-a-Ling" in 1972. It was the shortest song to reach #1 on the UK singles chart in the 1980s at 2'04". Rico Rodrigues and Dick Cuthell perform on "Guns Of Navarone" and "Longshot Kick The Bucket".

Here is the track listing:

The Special AKA - Too Much Too Young

I've been trying to hunt this down for ages. I had the EP back in the day, and had mp3s of it but the drive containing them died and I've long lost the mp3s.

There are so many versions out there of long shot but I could never find this one.

Thank you so much, you made an old rude boy a happy man today