Misty In Roots and The Ruts: Rock Against Racism Unites Reggae & Punk 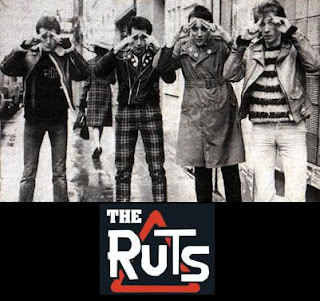 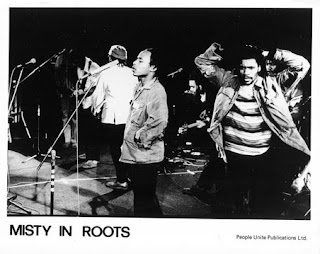 I have previously highlighted the ways UK punk and reggae bands came together under one umbrella in the late 70's. In many ways, the partnership of roots reggae band Misty In Roots and punk rockers The Ruts best exemplified this cultural collaboration brought together by the Rock Against Racism movement. Rock Against Racism (RAR) was a campaign set up in the UK by Red Saunders, Roger Huddle and others in winter 1976. It was founded in response to allegedly racist comments and gestures made by Eric Clapton and David Bowie.

In the spring and fall of 1978, RAR organized two major music festivals to counteract the growing wave of racist attacks in the UK. It has been reported that 80,000 people attended an open-air concert that featured The Clash (as seen in the film Rude Boy), Buzzcocks, Steel Pulse, X-Ray Spex, The Ruts, Sham 69, Generation X and the Tom Robinson Band. An audience of 25,000 came to the Northern Carnival in Manchester, for a concert featuring Buzzcocks, Graham Parker and the Rumour, and Misty in Roots.

It was through their involvement with RAR that reggae band Misty In Roots and punk/reggae band The Ruts came to work together, influencing and supporting each other. Both bands were from the Southall section of London. Misty In Roots added The Ruts as a opener on many of the RAR shows they played around the UK. Misty In Roots were full-fledged Rastas and The Ruts for all intents and purposes were skinheads. According to Dave Thompson in his book "Wheels Out Of Gear: 2-Tone, The Specials and a World in Flames, "For the two bands to appear on bills together was like detonating a bomb beneath a battalion of stereotypes."

The bands were also partners on the People Unite cooperative which was also Misty In Roots record label and they released the The Ruts first single "In A Rut". The song was picked up by the DJ John Peel and sold 20,000 copies. After several weeks on the Rock Against Racism circuit the band was signed by Virgin and hit the Top Ten with "Babylon's Burning", a classic that captured the simmering discontent on the streets. They followed this with other minor hits: "Staring at the Rude Boys", "Something That I Said" and "West One (Shine on Me)". lead singer Malcolm Owen died of a heroin overdose soon after the release of their debut album, The Crack, which became one of the staples of the genre.

The Ruts's music was a strongly original blend of punk, funk and dub meshed into a seamless whole by powerful, anthemic songs. In 1979, Clarence Baker, a member of Misty In Roots and the People Unite collective, was severely beaten and injured by British Riot Police during protests in Southall against the National Front. The Ruts honored Baker in their song "Jah Wars" which appeared on their album "The Crack".

Here is live video of The Ruts performing "Jah War" and "Babylon's Burning" on French TV in 1980:

Here is the band's final performance before Owen's death of "Staring At The Rude Boys" on TOTP in 1980:

Misty In Roots was one of the most powerful live reggae acts to come out of London and were noted for their powerful roots reggae sound and uncompromising lyrical vibrations and were a major force in RAR, playing more concerts than any other band in the movement. This opened up a whole new audience for the band who quickly developed a very strong cross over audience, playing with acts such as Tom Robinson, The Ruts and Elvis Costello. Despite their success as a live act the band did not release their first album until 1979. The album "Live At The Counter Eurovision", which was recorded live in Belgium during the band's 1978 tour, is today still proclaimed by many critics as one of the best live reggae album of all time. The band followed the LP with a string of limited edition singles such as "Oh Wicked Man", "Rich Man’, "Salvation", "How Long Jah" and "See Them Ah Come".

Here is a video of Misty In Roots performing on a John Peel session in 1983:

Below are the track lists and downloads of the debut albums by both bands:
The Ruts -The Crack
Babylon's Burning
Dope For Guns
S.U.S.
Something That I Said
You're Just A....
It Was Cold
Savage Circle
Jah War
Criminal Mind
Backbiter
Out Of Order
Human Punk (live at The Marquee, London, 19 July 1979)
Give Youth A Chance - CD Bonus Track
I Ain't Sofisticated"- CD Bonus Track
The Crack- CD Bonus Track

Misty In Roots - Live At The Counter Eurovision
Introduction
Mankind
Ghetto Of The City
How Long Jah
Oh Wicked Man
Judas Iscariot
See Them A Come
Sodom And Gomorrah
Posted by Marco On The Bass at 9:51 PM