The Specials Reunion Update: Neville and Roddy to play Sheffield on August 30th 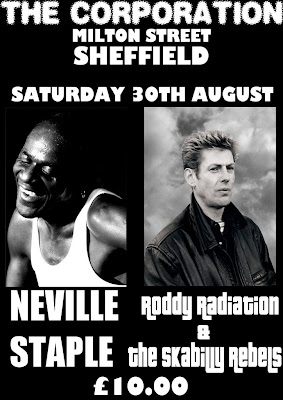 I have to confess that after much initial hope and excitement about a Specials reunion, I've come to believe it won't happen. Word is that Terry, Lynval, Brad, Horace and Roddy are on board but that Jerry and Terry remain at odds. Further complicating matters is that Neville has said that if Jerry isn't part of the reunion then he's out. We may see a tour with 5 of the 7, but it won't be what we all are hoping for. Oh well...
In the meantime, life goes on and if you happen to be in Sheffield later this month, then you have a chance to speak to Neville and Roddy in person and remind them that this reunion is bigger then the two of them and bigger than all seven band members. Oh, and you'll be sure to see a great gig as well. With all the band members now in the UK, maybe a few of them will drop in to guest on some songs. At the very least you may see Neville and Roddy play together.
If any one does attend the gig, please let me know. I would love to hear how it goes.
Posted by Marco On The Bass at 7:53 PM