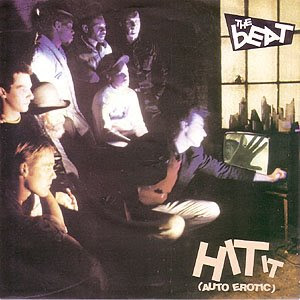 Fans of The Beat are always on the lookout for anything remotely new that they can add to the somewhat finite universe of recorded material that is available from the band. With only three albums and very few non-album tracks, its been, slim pickings for anything new. I recently discovered a track I had never heard before (and I'm an obsessive fan).

Back in 1981 the band released their eighth single, "Hit It". It was backed by "Which Side Of The Bed?". Neither track appeared on an album. This alone has made the single a popular collectors item. Indeed, I am not aware that the band ever performed the b-side of the single live, which is a shame as its an overlooked classic and a slice of vintage Wakeling reggae-pop. The single only reached the #70 spot on the U.K. singles chart (this was a portent of things to come for the band in the UK as they began to focus their attention on breaking in the U.S.).

Imagine my shock and surprise at hearing a completely alternative, dub remix version of "Which Side Of The Bed" re-titled "Cool Entertainer" that features Ranking Roger toasting joyously over the track. If you have any information about this track let me know. Otherwise enjoy the song which is part of the download below which also includes the 12" dub remix of "Pato & Roger Ago Talk".
Here is story from the NME in 1981 that sheds a bit more light on "Hit It" and "Cool Entertainer" 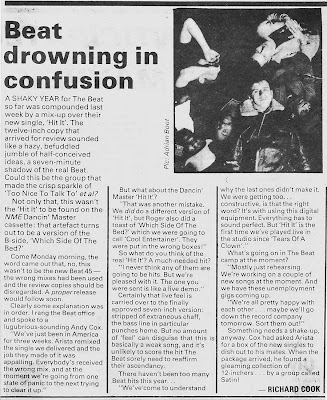 UPDATE: After doing a bit more digging I learned that "Cool Entertainer" is the b-side of the Go Feet Records release of the single "Ago Talk". Mystery solved. Regardless its not a track I had heard and I imagine many other fans of The Beat might have missed it.

Here is a live performance of the a-side "Hit It" from the Oxford Road Show in 1981:

Below is a tracklist and download of a mix including hard to find b-sides by The Beat and all their permutations including General Public, Ranking Roger, Fine Young Cannibals and 2 Men a Drum Machine and a Trumpet. Enjoy.

General Beat - Rarities & Remixes
Posted by Marco On The Bass at 7:12 AM

awesome!! thank you as always.

I haven't gone thru yr by the way brilliant site so you may have already posted this. When the beat first started they did a session for Radio 2 (at the time a MOR flip to the pop of Radio1 on the BBC) I can't remember the other songs they did or how many, I would suspect 4 but one was a magnificent version of 'Night & Day' done very much in a crooning style ala 'Can't Get Used to Losing You' but the vocals by Dave W were absolutely superb. A friend of mine (Gerry Murphy from the band Work Party) recorded it. Incidentally I found myself getting Work Party their second ever gig at Dindwalls in Camden Town supporting Curtis Mayfield!!! They did offer me the job of manager but I was about to leave London.
regards

I am really into The Beat and I have a few rarities and collectors singles. Thanks for posting these. Is there somewhere that lists the rarities and unreleased songs from that era? I know Dave Wakeling said there wasn't much out there on his bords, but I know there are bound to be some rare songs. Hit me up on Twitter and we can share what we have. Thanks! @crowdedhead

I have a few Rare Items by The Beat, the first is a Dub version of Mirror In The Bathroom released on "Music and Rhythm" (Various Artists) 1982. the 2nd is Hit It Instrumental Version (Go Feet White Label Promo) 1981. the last is a Rare version of I Confess available only on the Brazilian What Is Beat Compilation) 1983. None of the above tracks have been released on CD. Cheers Paul

Any chance of a re-up of your comp?

Where's a guy to find Whcih side of the bed in mp3, any ideas? My favorite Beat song ever!

This post has been quiet for quite a few years, but if anyone is still looking, you can find both "Which Side of the Bed?" and "Cool Entertainer" on Google Play Music as bonus tracks on Wha'ppen? (Remastered) and Special Beat Service (Remastered).
I recently went back and listened to everything Google Play has of the English Beat and "Which Side of the Bed?" and "End of the Party" both really stood out to me. Both very emotional -
almost haunting - they stick with me for days whenever I listen to them. Interestingly, I find myself humming General Public's "Never You Done That" after listening to "End of the Party."
I would like to get the lyrics to Cool Entertainer - the toasting is a bit tough to understand in parts - but didn't find them anywhere on the web.
Wes