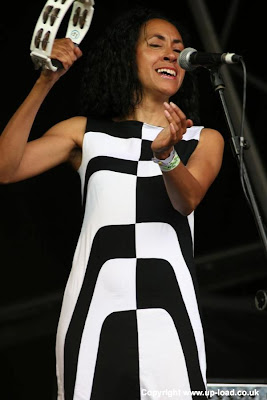 Rhoda Dakar began her career as lead vocalist with The Bodysnatchers. Their first single, "Do Rocksteady", b/w "Ruder Than You," written by Rhoda and Gaz "Rockin Blues" Mayall, took them into the UK pop charts (#22 in 1980) and onto Top of the Pops. The Bodysnatchers only released one more single "Easy Life" b/w "Too Experienced" and contributed a live version of "Easy Life" for the the "Dance Craze" film soundtrack (the film about 2-Tone included the live tracks "007 (Shanty Town)" and "Let's Do The Rocksteady").

Rhoda also had a UK hit solo single on 2-Tone Records with "The Boiler" backed by the Special AKA, before becoming a full member of Special AKA and appearing on their album "In The Studio" and the history-changing single "Free Nelson Mandela".

Since then, Rhoda has worked with artists as varied as Apollo 440 and Dr Robert of the Blow Monkeys fame. However, for the last few years, she has revisited her 2-Tone roots, guesting with The Selecter and appearing on a 3 Men + Black acoustic 2-Tone tour with Dave Wakeling (The Beat) and Roddy Radiation (The Specials), as well as, Pauline Black and Nick Welsh of The Selecter. Recently she was very proud to have been asked by the legendary Trojan Records to write a foreword for the latest release in their Reggae Sisters series, entitled 'Let Me Tell You Boy'. Rhoda will also be featured on atleast one track of the new Madness album "The Liberty of Norton Folgate".

Rhoda's first solo album, 'Cleaning In Another Woman's Kitchen', was released in May 2007. The album has been recorded and written with Nick Welsh. Here is a video of Rhoda performing an acoustic ska version of The Bodysnatchers song "Easy Life" that was recorded in April of 2008 with Nick Welsh of Skaville UK:

Rhoda is touring the UK with Skaville UK which includes ex-members of Bad Manners. The tour dates are below: