Jerry Dammers Speaks Out About The Specials Reunion Perfomance at Bestival 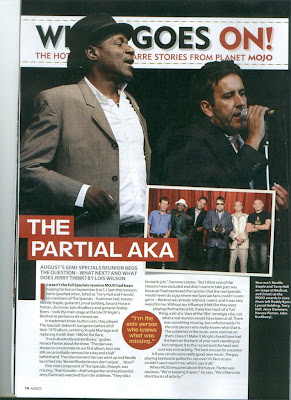 The November 2008 issue of Mojo Magazine includes a story titled "Partial AKA" that features a reaction quote from Jerry Dammers about The Specials reunion show that went ahead without him at Bestival in September. Amazingly, Jerry was at the show and watched the performance (I believe he was booked to do a DJ gig at the festival). Still, it is curious that he decided to watch rather than play. His reasons are summed up quite succinctly in his comment below.
"They did a fantastic job, but I think one of the reasons that I was excluded and didn't want to take part was because I had expressed the opinion that the real Specials would never do a gig where the real Specials fans couldn't even get in--Bestival was already sold out. I went, and it was very weird for me. Without my influence it felt like they were playing themselves a bit, it was too much of a 'fun' thing, a bit of a 'stars of the '80s' nostalgia vibe, not what a real reunion would have been at all. There was something missing, but unfortunately I'm the only person who really knows what that is. The subtleties in the music were a bit lost on them. "Doesn't Make It Alright" should have had the hairs on the back of your neck standing up, but compare it to the record and the heart and soul was a bit lacking. The best excuse for a reunion is if you can do some really good new music. The guy playing keyboards pulled his cap over his face so you couldn't see it wasn't me, which says it all."

Wow! Well without taking sides, Jerry's comments could give you a good sense why his bandmates may have decided to go ahead without him. With the 30th anniversary of The Specials and 2-Tone fast approaching lets hope Jerry is motivated to show up and fill in the missing "subtleties" rather than watch from the audience and critique. If you want to get a better sense of what hardcore fans of the band think take a trip over to The Specials web site where there is a lively debate taking place on their community forum page.
Posted by Marco On The Bass at 8:17 AM

I think what Jerry is saying is spot on, without him there is the danger of it becoming another 'Special Beat' (great for the initial tour but then carabet) or worse still...a repeat of 'Todays Specials'. Jerry was the brains behind it all in the first place so is the one best to be trusted to make sure its done in the right way. Apparentlly he wasn't told about rehearsals for this Bestival gig...

Can't go along with Ronan. Jerry sounds like he's egoing out a bit. That whole "The Specials aren't special unless I am there" would drive me up the wall if I was any of the other band mates.

Don't get me wrong, Dammers was a god to me back in the day, but that day is long gone. If any band from Steely Dan to the Pixies gets back out there after so long, humility and compromise are key. To come into something like this with the old ego and baggage is utterly useless.

As for the fear of cabaret, Special Beat and Todays Specials, there is absolutely no way that kind of lameness will be in effect with the full compliment on hand (Minus Dammers, of course). No way.


Suck it up Jerry, come out to play.
Respect the legacy, be a part of the exclamation point, or shut the F up and let the boys be the boys.

Turn that frown upside down and rediscover your inner RUDE!