Exclusive: Interview with Stefan Tylunas of The Ammonites 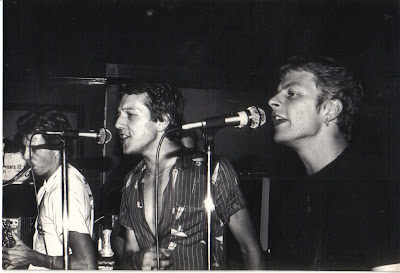 I recently posted about The Ammonites and their role as one of the only pure 2-Tone styled ska bands to emerge from the vibrant late 70's/early 80's music scene in Brighton that was centered around venues like The Vault and The Alhambra. The Ammonites were a six-piece who were influenced by the sound of Trojan rocksteady. When they started their set was comprised of all cover songs including Clancy Eccles "Fatty Fatty" and Lee Perry's "Tighten Up" which you can hear and download from the previous post. Over time they developed a repertoire of originals including "Blue Lagoon" which, in my humble opinion is a lost gem of the 2-Tone era. I have always loved the Everly Brothers go ska sound of the song.

The band line-up consisted of: Colin Smith (bass), Stefan Tylunas (vox), Nick Stewart (guitar), Steve Kelly (sax), Mike Roberts (guitar), and Dave Doleval (drums). Though the were mostly limited to playing shows in the Brighton area, they did open for The Vandals and Toots & The Maytals and were such a local draw that they drew more fans for a show they played in Brighton the same night The Beat were booked to play.

Below is an interview I did with Stefan Tylunas who was the lead singer for the band. He shared his memories and experiences of playing with the band. He was also kind enough to share the picture above which includes from left to right: Steve Kelly, Stefan Tylunas and Nick Stewart.

Can you tell me about your introduction to music and ska music in particular?
I began playing guitar and vocals in bands with my mates at around the age of 15. It was only much later when I was about 19 that I was invited along to an audition for vocalist with the then embryonic Ammonites. I met Dave Dolezal (the bands 1st drummer and founding member) in a pub one Saturday evening in Brighton. He was a friend and he asked if I was interested in singing in a ska band the next day. At first I declined because I had arranged to play football the next day with some mates. However I was interested to know what a Ska band did? and eventually agreed to meet the next day. We were to meet in a large shed at the local dog stadium, where Nick and Colin where groundsman. It started off with the 4 of us and then we bought in Mike Roberts and Steve Kelly. That was the beginning of the ska sound for me.

How did The Ammonites get started? Did you know the other members of the band before you started the band?
I knew Dave and it was he, I believe that was into all things Ska and reggae and because he was good friends with Nick they got the idea for a band. Nick and Colin were work colleagues.
Was there a ska scene in Brighton when the band started? Who did you play shows with? Where did you play shows?
I believe we were the only Ska band in Brighton and possibly the South-East

Who was the main songwriter for the band and tell me how you approached the song writing process? Who's idea was it to cover the Clancy Eccles song "Fatty Fatty"?
I guess Fatty Fatty was just another Ska song, that was a possible, that would fit into the set. Like a lot of bands that start up we just played ‘cover’ material and built it up in such a way as to give the set cohesion and a variety. After a while of playing the set, Mike and Nick were writing independently of each other and presenting songs to us for a critique. They would be virtually finished, however they were generous writers and allowed us a say in the arrangements and the eventual song writing credit was given to the band.

What were your first live shows like and what was the UK ska scene of the late 70's and early 80's like? Did you play any shows with any of the 2-Tone bands? What about The Piranhas?
We initially began playing locally at a venue called the Alhambra. It was a pub which had a regular clientele and everybody and anybody would play there. You would ‘start-off’ as virtual unknowns, playing on a Monday and depending on your abilities to draw a crowd would progress to Fri/Sat evening (unless you caught the eye of a better band and was asked to be support). We eventually held a regular Friday night spot and we had a ball. The dance floor was always very busy. The Piranhas also played at the Alhambra, they were more of a punk thing and we never did any support for them.

Can you share any unusual stories about touring with the band or any shows that are particularly memorable?
I guess the most memorable gig for me was support for Toots and the Maytals at the ‘Brighton Centre’. It still is to this day a Conference Centre which is used by bands, corporations and political parties to stage events. The potential for a capacity of around 5000, it was the biggest venue I had experienced. I remember the massive stage and being able to dance and jump about without crashing into any of the band or the equipment, it was just great fun. I can’t remember meeting any of the Toots, probably to nervous to introduce myself, but I’ll never forget the smell coming from inside there dressing room.

Tell me about recording "Blue Lagoon" for the Vaultage 80" album. Did you record any other songs? Was there a plan to record an album?
Blue Lagoon was a song Mike had brought to the band. For all I can remember, it was recorded locally and the day I sang the vocal I had a cold. Apart from never liking my vocal, Nick and I always sounded well together. Steve’s sax is great (as was always the case) and Mikes guitar parts were always cleverly worked. We recorded "Big Eaters" and "Dressed to Kill" and that was all that I’m aware of.

How and why did the band come to an end?
I became disillusioned and tired with how we were being managed and left to return to college. The boys carried on for a while, but not sure for how long.

Are you still in touch with any of your old band mates?
No. However, we met a few years ago with the intention of reforming for a ‘Benefit’ but unfortunately nothing came from it. Shame.

Are you still active musically?
No, apart from singing in the bath!

Finally, what is your take on the current state of ska in the UK?
There has been a wave of revivalism here in the UK from 80’s bands. But nothing really happening mainstream and certainly not Ska. The BBC recently aired a show on the radio entitled ‘Too much to Young’ celebrating the ‘Two Tone Label’ established by Jerry Dammers and the bands associated with it. But apart from Suggs appearing on TV adverts here in the UK there isn’t any ‘scene’ to be talked of.
The Punk Brighton Web site has made a 15 song rehearsal tape the band recorded in 1980 available for free download. The link is below. Enjoy!
The Ammonites - 1980 Rehearsal Tape
Posted by Marco On The Bass at 8:21 PM

How fantastic it was to see this photo! I remember the Ammonites well. Their music was the best at the time! They could have gone far if things had worked out. I was a good friend of Stef and Dave. I wish you both well! Sue

Stefan we are Lithuanian Tylunas' in the US! Any connection?