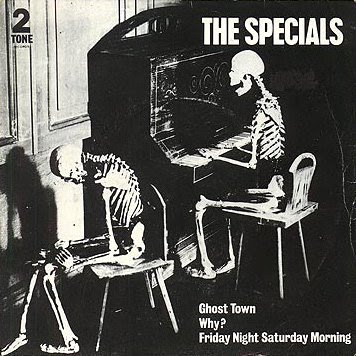 Happy Halloween. Today's post is to honor The Specials song "Ghost Town" and the way it captured and crystalized a moment in time and history. The song has a timeless quality. It never sounds dated and its lyrics have never been more pertinent. Ghost Town was The Specials last hurrah and they went out on top with a #1 hit on the UK pop charts. The song was released in response to the UK's then conservative government's failed economic policies that resulted in massive layoffs and unemloyment. Sound familiar?
There was an amazing article published in The Guardian in 2002 that provides a behind the scenes look at the genesis of the song and its recording. You can read it here.
Here is the classic Ghost Town video:

The covers are an eclectic mix including:
-The Dead 60's -my pick for the band that could have carried the mantle of The Specials into the 21st Century (had they not broken up)
-The Prodigy and their funky hip hop/dance take on the track
-An indie rock take on the track by the band Get Cape, Wear Cape, Fly
-Finally, a very eerie and spooky live version of the song featuring Terry Hall and Tricky

Hey Marco
this is a little off track but writing to ask a favor. Used to hang on NYC rude set back in early '80's. Maybe I knew you back then? Anyhow, my oldest and still my best friend is Cavo from the Toasters. I introduced him to Lionel. Anyhow been living in LA for almost 20 years, now back in NY Unfortunately my records are still in LA. Really need a clean quality mp3 download of "Which Side of the Bed"/"Hit it" !2". Can't find one any where! Can you help me out with that? Would be much obliged. Best.
Lex (email Rexmen@Mac.com)
p.s. spent many youthful sweaty skanking nights (as far back as H.S.) at city gardens.