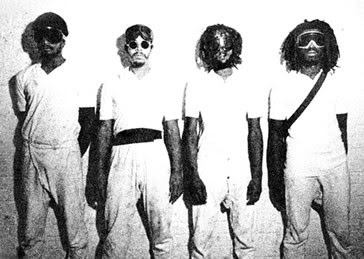 Basement 5 were arguably the first black punk reggae band who are described by many artists who followed them as "hugely influential" and "groundbreaking". Mixing rock elements with reggae and dub they were one of the bands that broke down barriers and paved the way for black kids to play rock music. Starting out in London in 1978, the band were an innovative and highly original post-punk group who created a kind of politically charged, futurist, punk-fuelled dub. The lyrics were an attempt to reflect the situation of young people in Britain in the era of Thatcherism, high unemployment, strikes, racism, and working class poverty.
Originally assembled by former Roxy DJ and punk legend Don Letts with money from Island Records' chief Chris Blackwell, the band's personnel was Winston Fergus on vocals, former Roxy barman and friend Leo Williams on bass (who went on to play with Big Audio Dynamite and Mick Jones' current band Carbon/Silicon) and friends J.R. on guitar and Tony ('T') on drums.
By 1979 after a short vocal stint by Don Letts himself, Basement 5's lineup was solidified with Sex Pistols/Bob Marley photographer Dennis Morris as vocalist, Leo, J.R. and soon to follow, ex-101'ers and PIL drummer Richard Dudanski. In their short life, the band supported John Lydon's Public Image Limited (PIL) debut at London's Rainbow Theatre, performed a number of shows in Portugal and signed to Island Records. The result was the album "1965-1980" co-produced by the legendary Martin Hannet (Joy Division. Magazine). It became the first and only Basement 5 LP. Long out of print, it was eventually reissued as a partial album along with selected tracks from its original dub mini-LP partner 'Basement 5 In Dub'.

The album did not sell as well as expected and as with so many other bands before and after them they fell in pieces and were never to deliver a follow up. Basement 5 had broken up by the end of July 1981. Dennis Morris blames their lack of success firmly at the feet of Island who according to him were spending all of their energy on breaking U2. He goes further by saying that after playing together, Bono and the boys borrowed various elements from Basement 5 that helped to contribute to their success!

It is somewhat criminal that there is nothing freely available from the band, despite '1965-1980' being coupled with 'In Dub' for a partial CD reissue. So it's happy hunting on E-Bay where you can overpay for it or whatever...


Below are downloads of their first single "Silicon Chip" b/w "Chip Butty".

Hi MOTB, Any chance you'd consider re-posting these tracks with another site 'cos Zshare is trapped in some weird sorta loop? Been after these 2 songs for AGES so would uber-appreciate it! Hope you can help... IBx

Thanks for the comment. I'll take a look and see what I can do. Check back again a day or two.