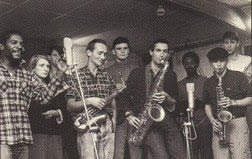 The Potato 5 were, god bless them, one of the very few ska bands doing the rounds on the live UK and European circuit of the late 80's at a time when ska was no longer flavor of the month, and long after the demise of 2-Tone. In hindsight, the band did help to pave the way for the 3rd wave of Ska that began to emerge towards the mid 1990's in both the U.S. and around the world . They were well known for being a great band live and they helped to introduce old timers like Laurel Aitken and Floyd Lloyd to a younger audience.

Known primarily as one of the best live acts of the late 80's UK ska revival the band got its start in 1983 as a ska instrumental band in the vein of The Skatalites. The band teamed up with Jamaican singer Floyd Lloyd and later with the legendary Laurel Aitken and recorded their debut album in 1986 "Floyd Lloyd & The Potato 5 Meet Laurel Aitken". Their second album, True Fact saw the band experimenting with a mix of Ska and hip hop. In 1989 the band recruited Spider Johnson to sing and they embraced a classic skinhead reggae sound and released the excellent "Do The Jerk" single. The band called it a day after playing one final show at London's Town & Country on December 20th, 1989.
Below is the tracklist and download for a mix of unreleased and rare Potato 5 tracks:
Tracklist:
Reburial
Dial M For Murder
Things I Do
A.N.C.(unreleased)
Dead Boring (Dub)
Do The Jerk (7 inch)
Do the Jerk (Dance Hall Pressure Mix)
Reburial (Lightning Flash Mix)
Ska Danger (Dub)
Sahara (alternative version) featuring Laurel Aitken
Sweet Lady (unreleased) featuring Floyd Lloyd

Brilliant. Thank you for this post. I have "True Fact" and
"Five Alive" and I've been looking for more from them. I love the song "A.M.C."

Their first EP with Floyd Lloyd is a classic but I cannot find any references to it anywhere I search. I picked it up in 1986 or 1987.