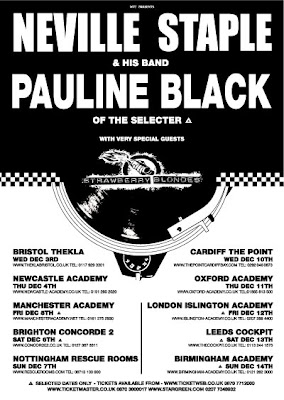 As fans await word on when the reunited version of The Specials (minus Jerry Dammers) will perform again, there was excitement about a UK tour this December featuring Neville Staple's band along with Roddy Radiation's Skabilly Rebels and then Pauline Black of The Selecter. The hope was that these shows would satisfy demand for more shows by The Specials while they work out their next move. However a recent statement by Neville Staple on his MySpace page seems to suggest that this tour will not happen. It appears he had a falling out with the promoter who continued to advertise shows despite Neville informing him that he had pulled out.

You have to hand it to members of The Specials. They know how to keep fans engaged in their ongoing dramas and business disagreements.

A PERSONAL STATEMENT FROM NEVILLE STAPLE
In reply to recent postings on the Specials website forum and and other websites regarding a U.K tour in December 2008, and for the avoidance of any doubt, I would like to confirm to everyone THIS TOUR IS NOT HAPPENING.
The tour promoter was Informed at the end of September that due to personal differences, I was unable to work with him and would not be doing the PROPOSED tour with my band.

He clearly has not listened, as he has for some reason, continued to advertise the tour now with Pauline Black instead of The Skabilly Rebels?

This is not the case, and I am not prepared to endorse these advertised shows as they have never been agreed by me personally.

I WILL NOT BE APPEARING WITH MY BAND AT ANY OF THE VENUES ON DATES ADVERTISED SO PLEASE DO NOT BUY TICKETS!!.

Refunds for tickets already bought are the responsibility of the ticket agencies once the promoter confirms to them that the shows will not take place.

The Promoter should not still be promoting or advertising these shows.

Thank you for your continued support.

Neville
While you are visiting Neville's page take a listen to two new songs he has posted "What Can I Do" and "Entrapment" which are quite good.
Posted by Marco On The Bass at 7:52 AM