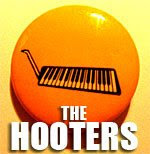 I grew up in Central New Jersey and went to college at Rutgers University in New Brunswick, NJ. It was equidistant to both New York and Philadelphia from where I lived. Though I was always drawn to New York for concerts and records, there were some interesting things going on ska wise in Philly in the early 80's. Through word of mouth I heard about The Hooters. I liked their first independent album Amore which has a ska/reggae feel. After getting signed they re-recorded many of the ska sounding songs as rock songs and went on to MTV fame and fortune. I lost interest.

Believe it or not, when the Hooters started out in the early 80’s they could have been described as a ska band(including melodica on many of their tunes, hence the band name Hooters). Their very first recording, a demo that got a lot of airplay on WMMR in Philadelphia in 1980 (where they were a popular local band) was a version of Don Drummond’s ‘Man In The Street’. It was never released commercially. I didn't know at the time that it was a cover, but I remember thinking it was an amazing song. Only later did I make the connection that it was a great cover version of what has become one of my favorite Don Drummond/Skatalites songs.

Once again it is interesting to see the way ska and reggae has really influenced and changed the sound of so many bands. Too bad that The Hooters didn't stick with the sound. I think they could have been the US version of The Police.

Below is a live version of The Hooters performing "Man In The Street". The band has taken Drummond's classic trombone melody and turned it into a great guitar riff. To all you skeptics shaking your heads take my word and give it a listen. Its really good.

Marco been weeding through your blog. Grade A man. I love the Hooters info. I love the band to begin with but this piece of unknow info to me is really cool this along with the Cyndi Lauper association is really moving the boys up the ranks in my book.