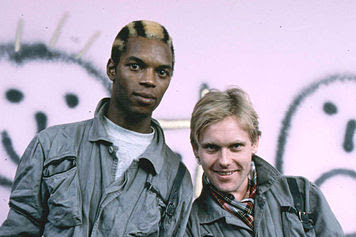 I have always been an unabashed fan of General Public. I guess alot of it had to do with all the love I had for the English Beat. I only got to see The English Beat once so I fully embraced Dave Wakeling and Ranking Roger's breakaway project. I was lucky enough to see one of their first shows in New York at the Ritz before releasing their first record. They all came out in matching green jump suits and played every song on their soon to be released album and even played the song "General Public" twice to pad the set.
I remember haunting Music In A Different Kitchen which was a very cool alternative record shop in New Brunswick during the fall of 1984 waiting for the album. I would go in each week and ask Judy the owner of the store if she had gotten the new General Public album. Invariably she would sigh, roll her eyes at me and say that it had still not arrived. Finally sometime around October or November of that year my query was answered with a big smile as she pulled the album out from behind the counter. I ran back to my dorm with the album and played it non-stop for several days. The sounds of that album still evoke much of my second year at Rutgers University.
I was just excited to find all of the demos and alternated takes from the original songs on the album along with a few b-sides and unreleased tracks on McCrank's Juke which is one of the finest music blogs I have found on the Web. McCrank is one well connected fellow as he has all sorts of amazing finds on his site and he also has a soft spot for The English Beat and General Public. Definitely give it a visit.
As a songwriter I always like to have a peek into the songwriting process of others. With these songs we are given access into the progression of a song from early demo to finished product as well as some of the small experiments the band tried with alternate takes. Pure gold for music geeks.
Mick Jones is given credit for playing guitar on the first GP album though its hard to hear his playing in the mix. These versions give you a better shot at picking out his handiwork if you listen hard.
Here is General Public video performances from YouTube:


General Public - Demo's & Unreleased Tracks
Posted by Marco On The Bass at 2:01 PM

Don't suppose you can reup the general public demos, etc