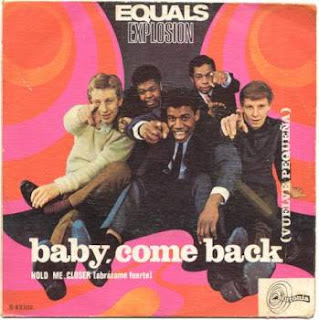 There is a lot more to Eddy Grant than "Romancing The Stone" and "Electric Avenue". In fact the man helped to change the face of music in the UK in the 60's with the multi-racial band The Equals. Known best for the original versions of "Baby Come Back" and "Police On My Back" the band mixed 60's pop-rock with hints of ska, soul and RnB. The riff for Baby Come Back is Hall of Fame worthy in my book.

The Equals were a pop/reggae/rock group that formed in North London in 1965. They are remembered mostly for the fact that Eddy Grant, then sporting dyed blonde hair, was in the group. Also in the original line-up were the twin brothers Derv and Lincoln Gordon, as well as John Hall and Pat Lloyd with supporting drummer Paul Pegler.

They first started rehearsing on a council estate at Hornsey Rise, North London in 1965. In 1966 the group released the "Hold Me Closer" / "Baby Come Back" single, which did not capture much attention in the United Kingdom. However, in Germany and The Netherlands it went to #1 - a position its re-issue would later reach in the UK. Thus, the racially mixed London group gave President Records their only number one hit. A gold disc was presented to the group in June 1968 for a combined one million sales of the record. The year 1968 saw the release of "I Get So Excited" which appeared in the Top 50 of the UK Singles Chart. It was reported in September 1969 that all five members of the group had been injured in Germany, when their car ran off an autobahn in a gale.

A string of single releases followed up to 1970, all of which charted in the UK. The group also attracted attention as one of the few racially integrated bands of the 1960s, which was reflected in the group's name: The Equals.

In 1971, Grant went home to Guyana, following a collapsed lung and heart infection which put him out of action at the beginning of that year. He promptly left The Equals to pursue his solo career. He would have eventually release several Top 40 singles in the late 1970s and early 1980s; among them, "Living On The Front Line", "Electric Avenue", and "Romancing the Stone". Grant also topped the UK Singles Chart in 1982 with "I Don't Wanna Dance". Although the band never charted again after Grant's departure, they remained a popular live act, performing into the late 1970s and beyond.

In the late 1970s, The Clash recorded a successful cover version of The Equals' song "Police On My Back". In 2006 Willie Nile released his cover of "Police on My Back" on his Streets of New York CD. Plus, The Hypertonics have covered "Police On My Back" in concert.

The Equals' song, "Green Light", was covered by The Detroit Cobras, on their 2007 album, Tied & True.

The song "Baby Come Back" refused to go away. The track returned in 1994, when Pato Banton scored an unexpected UK number one with his cover of the song.

The Equals - The Best of The Equals


Now here is some music history. Check out this amazing set of songs by The Equals from German TV in 1966 featuring Baby Come Back/Hold Me Closer/Hey Baby It's Time You Got Going.


Here is a great 2-part interview with Eddy where he discusses the early days of his career. The interviewer appears to be from Eastern Europe so the intro is not in English but the interview itself is in English. Enjoy.