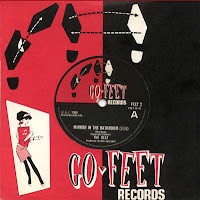 Formed by the Beat in 1980, the Go Feet label would end up releasing eighteen 7-inch singles, eleven 12-inch singles, and 6 LPs in its three year lifespan. These releases would go on to become highly significant in the worlds of ska, reggae, and pop.

As a result of the break out success of the Beat's first single which was released on the Two Tone label, the band was courted by numerous major labels hoping to cash in on the ska craze in the UK. The Beat established their own label to shield themselves from the many negative aspects of dealing with corporate record labels. In this way, the band was given more creativity to record the music as they wanted as well as to expose bands that the major labels would not take a chance on. Dave Wakeling describes the band’s inspiration for forming the label: as coming from “the Specials’ notion of Two Tone. We were quite impressed that it appeared that they had signed with a record label that could get them on the radio and that they had control of them.” 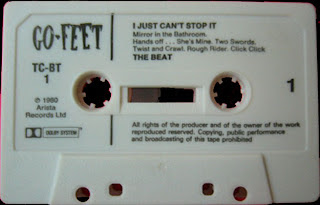 However, the Beat soon discovered, the benefits of such agreements were short-lived. They still faced great pressure to deliver hits as well as creative interference from the record executives. Arista’s promotion men had quotas to meet when they ventured out to the radio stations with their stack of records. These men gave men priority to established names that were easier to persuade the stations to play. Boutique labels, like such as Go Feet, would be placed on the bottom of the stack with far less emphasis placed on securing air time for them.
Arista distributed the label in the UK and throughout Europe, Japan, and Australia. I.R.S. distributed it in the USA the band had tried an initial run with Sire.

Cartoonist Hunt Emerson, known best at the time for his Firkin the Cat comic, is responsible for the design of the label, which has become just as memorable as the music its self. A simple palette of red, black, and white makes the records stand out. Meanwhile, feet in the style of a dance instruction chart are spread across the top. The bottom left is occupied by one of the most recognizable ska icons: the Beat Girl. Like the Two Tone icon "Walt Jabsco" who she is often associated with, the Beat Girl was inspired by a Jamaican ska photograph. She is a sketch of a girl dancing in a photograph with Prince Buster. She as well as many other elements of the design were inspired by the Beat’s first promotional poster. The poster also is the origin of the Beat’s logo, which Dave had sketched from a photograph of the Beatle’s drum kit. As sales declined, Arista made the decision to stop pressing the 7-inch singles with the traditional Go Feet paper label in favor of the cheaper (and far less attractive) molded silver label.

For more detailed information about Go Feet visit the web site devoted to the label
Posted by Marco On The Bass at 10:40 PM