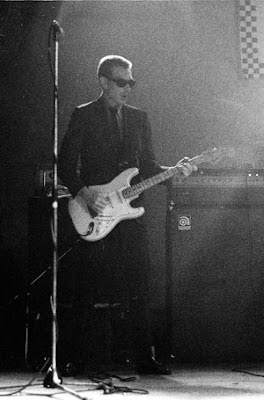 I've been meaning to post about The Selecter for some time now and Neol Davies in particular. I have a very soft spot in my heart for him and for Pauline Black. The first real tour my band ever did was during the summer of 1991 with The Selecter when they re-formed for a one-off tour to play shows in the U.S. They were both very kind to us and Pauline remembered us recently when I saw her last summer. I'll post more about Pauline at another time.

Neol Davies was a massive mover in the 2-Tone movement as the lead guitarist and songwriter for The Selecter. If Jerry Dammers was the President of 2-Tone then it was surely Neol who took the vice-presidency. While The Specials were busy experimenting with irony, it was The Selecter who really drove home the message of unity with Neol’s hard-hitting compositions. Songs like On My Radio, Three-Minute Hero and Too Much Pressure will always be rightly linked to him but there’s a whole lot more to Mr Davies than just The Selecter. Pre-Selecter days saw him playing in bands like the bluesy Cat’s Grave, Mead, Chapter Five and the seminal Transposed Men. His post-Selecter days gave him the chance to champion his love for the blues once more with The Box Of Blues, a project that included Horace Panter & Anthony Hearty.

I've always been very interested in how all the 2-Tone bands got started. It turns out that many members of The Specials and The Selecter travelled in the same circles in mid-70's Coventry and were in bands together. One that was key to the birth of The Selecter was the Transposed Men. The line up consisted of Neol Davis, John Bradbury (before he defected to the Specials) Kevin Harrison, Desmond Brown (later in Selecter) and Steve Wayne. Kevin Harrison has added an early rehearsal sudio recording to his personal history site of On My Radio. This is just a rehearsal tape but shows the song in development with some different musicians before Selecter was born a little while later.

On My Radio - Transposed Men

Neol's musical career has continued evolving. Below is a live performance of the Skatalites classic "Ali Pang" re-arranged and performed by Neol and his 8 piece instrumental ska band in 1995. Apparently this is the only video recording of the band that exists though there is an unreleased album. Now he is best known for his band Box Of Blues which features Horace Panter on bass. For more information on Neol's musical endeavors and a detailed history of his life in and outside The Selecter please visit his great web site.