Amy Winehouse sings "Free Nelson Mandela" by The Special AKA 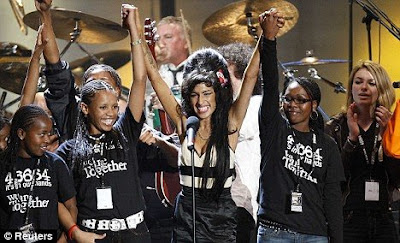 Based solely on the number of people visiting this blog to download the Amy Winehouse "Ska EP" I would like to believe there is great interest in her continuing embrace of ska, 2-Tone and The Specials in particular. Everywhere she performs these days she seems to play a song or two by The Specials.
Winehouse was invited to perform at the 46664 Concert in London in late June in London to honor Nelson Mandela's 90th birthday which was a few days ago on July 18th and she sang the lead on "Free Nelson Mandela" with Jerry Dammers and The Soweto Gospel Choir. The 46664 refers to Mandela's prison number. He was imprisoned on Robben Island in 1964, and was the 466th prisoner to arrive that year. "Free Nelson Mandela" was written by Jerry Dammers and performed by The Special A.K.A. It was released as a single in 1984 as a protest against the ongoing imprisonment of Mandela but the Apartheid government in South Africa. Unlike most protest songs, the track is upbeat and celebratory, drawing on musical influences from South Africa. The song reached No.9 in the UK charts and was immensely popular in Africa.

Here is the video of the performance:

good for her, well done