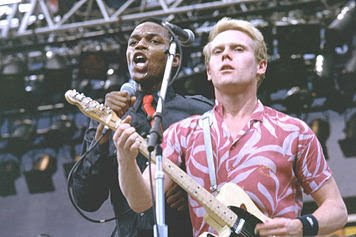 While I was walking around Ska Weekend at the World's Fair Park in Knoxville, Tennessee this past weekend, I was reminded of the US Festival which took place in San Bernadino, California in 1982 and 1983. The US Festival (US pronounced like the pronoun, not as initials) were two early 1980s music and culture festivals sponsored by Steve Wozniak of Apple, Inc. and broadcast live on cable television. The first was held Labor Day weekend in September 1982 and the second was Memorial Day weekend in May 1983. Wozniak paid for the bulldozing and construction of a new open-air field venue as well as the construction of an enormous state-of-the-art temporary stage in San Bernardino, California. (This site is still the largest amphitheatre in the United States.) 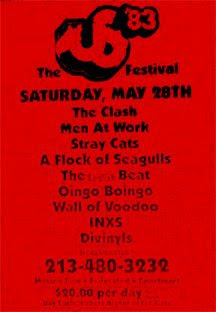 The two US Festivals were the first major festivals since Woodstock that were not charity concerts—they were intended to be celebration of evolving technologies; a marriage of music, computers, television and people. They were the first large concerts to include video screens to bring the action on stage closer to the audience at the rear of the amphitheater, as well as to cable-television viewers at home. Each of the two festivals had hundreds of thousands of people in attendance, but were resounding commercial failures. It is estimated that Wozniak lost nearly $20 million over two years. This past May was the 25th anniversary of the 1983 US Festival. There is a great multi-media story on the anniversary that was printed in the Press Enterprise which is located in Riverside, California where the festival was based. There is also a great Video featuring the memories of concertgoers who attended and some amazing pictures.

The only band to be invited to play both the 1982 and 1983 US Festival's was The English Beat. The two invitations are a testament to the hard work they put into breaking the U.S. The release of 'Special Beat Service" in the US in 1982 had solidified them as a "new wave" band rather than a ska band and that helped to expand their audience here. The band are at the height of their game at the 1983 festival, performing an eclectic mix of songs from all three albums. Its bittersweet to listen to their performance because the band came to an end a few short weeks later. Dave Wakeling has related to me that he and Roger had decided shortly after the US Festival to quit the band and he described how he wrote a resignation letter and slipped it under the door of their management. That night David Bowie called and said "You were amazing at the US Festival. I want you to be the opening band for my entire "Serious Moonlight Tour." Dave said that when he received that news he ran back over to the management office late that night and tried in vain to use a metal coat hanger to get the letter back from under the door but it was to far under and he failed to snare it. He says he took it as a sign that the band was meant to end.
Here is the set list:
Mirror In The Bathroom
Doors Of Your Heart
Two Swords
Jeanette
I Confess
Too Nice To Talk To
Spar Wid Me
Get A Job
Stand Down Margaret
Tears Of A Clown
Ackee 123
Twist & Crawl
Ranking Full Stop
Save It For Later
Jackpot
Here is an audio download of their performance:
The English Beat - 1983 US Festival
You buy DVD's of the entire 1982 and 1983 US Festivals here.
Posted by Marco On The Bass at 11:59 AM

I was 13 years old and this event changed my musical taste immediately. I was 13 and worked 16 hours that dayin a hot dog stand there for my little league to help raise money. Little did I know that I would be seeing some of the best bands of the decade! I took a break that day to watch the english beat. I was a fan for life. Now my 16 year old daughter loves them and plays them on her iPod all the time. Great memories.