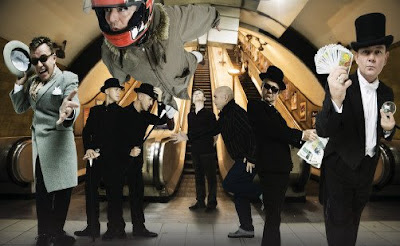 If you hadn't heard the news, Madness are primed to release their first new studio album titled "The Liberty of Norton Folgate" in nearly 10 years. Rumor has it the album may be coming out any time between July and September. The band showcased much of the new album live at London's Hackney Empire late last week with shows 6/24, 6/25 and 6/26. Apparently you can buy USB Wristbands with the live sets from each night here.
So what's up with the name of the album you ask? A tribute to an area of London that became a byword for creativity and cultural diversity, you can walk across the Liberty of Norton Folgate in a few minutes. For centuries, Norton Folgate, just north of the City, was a Liberty - free from the rules that governed most of London. Here lived actors, musicians, artists, writers, thinkers, louts, low-lifes and libertines - outsiders and troublemakers all. Now, in danger of vanishing beneath corporate steel, glass and concrete, the area's last old Victorian power station, an important historic survival saved from dereliction is threatened with demolition. The Light stands in the way of a planned 50-story skyscraper, part of a 650,000sq ft development of offices and shops. A petition to save it has been signed by more than 5,000 people. Across the road, even more high-rise office buildings are planned. Another is just being completed.
An accidental discovery of documents in an archive earlier this year led to the realization that the old independence of Norton Folgate, which gave Madness the inspiration to celebrate it in song, might just survive. Campaigners fighting the spread of skyscrapers at Norton Folgate are now investigating its legal status and history, and hope soon to reconvene the Liberty's ancient government to repel the skyscraper threat. But the battle for Norton Folgate isn't only against one development plan; it is for the protection of the best of familiar old London - shabby perhaps, but soulful - and against the corporate blanding of Britain's cities and towns. Madness wrote the songs on their new album long before they found out about the anti-skyscraper battle there - and campaigners didn't know the band had named their new release after the area.

Now about the music. Here is a live video of the band's performance of the title track from the Hackney Empire show on 6/26/08

The Hackney shows featured jugglers, ukelele playing chimney sweeps, pearly Kings and Queens, and had a full orchestra. Split into 3 acts, Madness performed the major part of forthcoming album 'The Liberty Of Norton Folgate', topped off with a 40 minute classic singles set including 'Baggy Trousers', 'Embarrassment', 'My Girl' and 'House Of Fun'. The band performed new tracks 'Bingo', recent single 'NW5' and 'Sugar and Spice' during the second part of the show. Suggs described his duet on 'Out On The Town' with guest vocalist Rhoda Dakar of Bodysnatchers, Special AKA, as "A dysfunctional Sonny and Cher."Lastly Madness played the 10 minute title track, 'The Liberty Of Norton Folgate' a stunning opus, classic Rise And Fall era Madness.
Madness played:
Overture
We Are London
Idiot Child
Bingo
NW5
On The Town
Overture II
MKII
Sugar And Spice
Dust Devil
Clerkenwell Polka
Forever Young
------------
The Liberty Of Norton Folgate
------------
One Step Beyond
Embarrassment
The Prince
House Of Fun
Baggy Trousers
Madness
Our House
It Must Be Love
My Girl
Night Boat To Cairo
Here is the Overture and "We Are London"


For the latest news on the release of the 'The Liberty of Norton Folgate' Box set and digital downloads visit the most recent post here.
Posted by Marco On The Bass at 7:53 PM

That's why you are on Ska 4U's blog roll!