Steel Pulse: Reggae formed in the crucible of UK punk 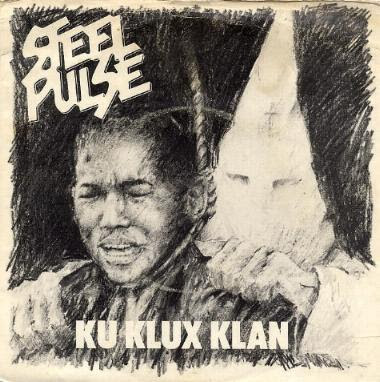 I distinctly remember the first time I heard (or rather saw Steel Pulse). My college had a free movie night every Friday in the student center. This was before the advent of personal computers and long before VCR's were affordable enough for students to have their own in their dorm rooms. The Student Council was showing "Urgh A Music War." The movie was an amazing compilation of the best of British punk and new music and let me see bands that MTV would never show. There is a point in the film when Steel Pulse appear and kick right into "Ku Klux Klan" that crystalized my love of reggae. Its a theatrical performance punctuated by the appearance of one of the band members in a white Klan hood and gown that sent shivers down my spine. Coming out before The Specials released "Ghost Town," the song was meaningful to me and my friends as we attempted to make sense of the increasing racial polarization around us and Klan and Nazi Party marches that were in the news in places like Boston, North Carolina and Skokie, Illinois. As a budding musician, this song demonstrated the power of combining a political conscience with story telling that could entertain and educate. Its something I still believe and miss in most of current music today.

This is a clip of Steel Pulse playing "Ku Klux Klan" live at the Rainbow Theatre London, England September 18th, 1980 that was featured in "Urgh A Music War"

Steel Pulse originally formed at Handsworth Wood Boys School, in Birmingham, England and comprised of David Hinds (lead vocals, guitar), Basil Gabbidon (lead guitar, vocals) and Ronald McQueen (bass). Surprisingly, they were initially refused live dates in Caribbean venues in the UK because of their Rastafarian beliefs. Aligning themselves closely with the Rock Against Racism organization and featuring in its first music festival in the spring of 1978, they chose to tour with sympathetic elements of the punk movement, including the Stranglers, XTC and others. Hinds was quoted as saying, "Punks had a way of enjoying themselves - throw hordes at you, beer, spit at you, that kind of thing." In fact Jim Kerr of Simple Minds was just quoted in the Birmingham Mail a few days ago thanking Steel Pulse for giving them their first opening gig in Glasgow in early 1978.

Their first release for Island was the Ku Klux Klan 45, a considered tilt at the evils of racism, and one often accompanied by a visual parody of the sect on stage. By this time their ranks had swelled to include Selwyn 'Bumbo' Brown (keyboards), Steve 'Grizzly' Nisbett (drums), Alphonso Martin (vocals, percussion) and Mykaell Riley (vocals). Handsworth Revolution was an accomplished long playing debut and one of the major landmarks in the evolution of British reggae.

There is a great feature on Pete King who was Steel Pulse's first manager on Andy Brouwer's web site dedicated to all things Steel Pulse that offers a real insiders view of the early days of the band and its success in the UK and around the world. 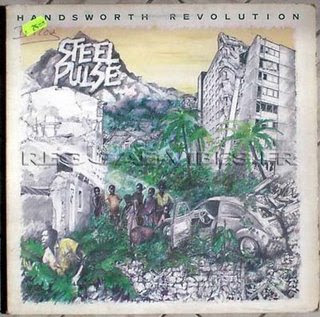 Here is a download of their Handsworth Revolution album:

Steel Pulse - Handsworth Revolution
Posted by Marco On The Bass at 8:18 AM

Great song and great movie that it was in. I'm still holding onto the hope that things will be worked out and Urgh! will be released some day on DVD.