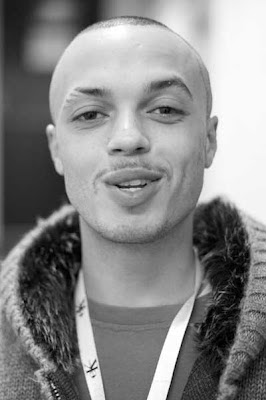 Unfortunately for fans of The Beat (The English Beat in the U.S.), Dave Wakeling and Ranking Roger are not on speaking terms at the moment. In fact, based on a prior agreement they have split the world between them. Wakeling's version of the band perform and tour across the U.S., while Roger's version (featuring original band member Everett Morton on drums) have the U.K. and Europe and never the twain shall meet. In fact, the last time Wakeling and Roger appeared on stage together was during a reunion at the Royal Albert Hall in London in February 2003 (you can buy the DVD of the performance here). What struck me when I watched the performance, was the introduction of one Matthew Murphy also know as Ranking Junior and/or Mini Murphy who stole the show in my humble opinion. He also happens to be Ranking Roger's son. 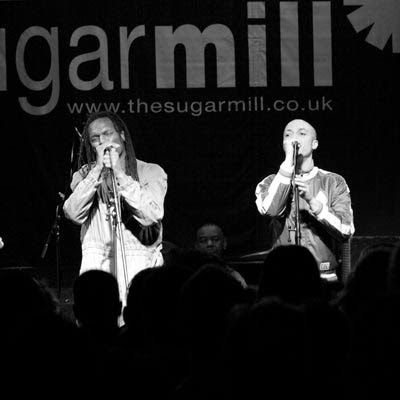 Though I have yet to see Roger's version of the band, I like what I've seen on video and in particular I enjoy the chemistry and stage presence between Roger and Ranking Junior. I'm also heartened that another generation has arrived to carry on the mantle of the band. Here's to hoping that the album Roger has mentioned he is working on will prominently feature his son who has had a ride in the Top 10 when he appeared on the Ordinary Boy's hit "Boys Will Be Boys".

Here is some video of The Beat featuring Ranking Junior performing "Jackpot" this past fall:

Here is a video of The Ordinary Boys song "Boys Will Be Boys" that features Ranking Junior:


Below is an interview conducted by the BBC with Ranking Junior during a Ska Festival in the U.K. in 2006 shortly after his appearance with The Ordinary Boys:

Did you always want to follow your dad [Ranking Roger] into the band?
Ranking Jr: Since I was about eight or nine I have always wanted to be in music and since I was about 12 or 13 I've been writing my own stuff. When I was about 18 they reformed The Beat again and I joined and became a full member. But before that I was doing stuff with my dad anyway. The two of us would go out and do some of my songs and some of his songs.

So you've always listened to his music?
Ranking Jr: Oh yes - definitely. It's always been in my life.

You're doing other projects as well though aren't you?
Ranking Jr: Yes - I'm doing other stuff as well, I'm doing a little bit of drum and bass and a little bit of hip hop as well. I try and mix all different styles together and try and form an original kind of style with a bit of everything in there.

You've performed with The Ordinary Boys haven't you? What was that like?
Ranking Jr: Absolutely fantastic. Preston came to one of our concerts in Brighton and spotted me there and asked me if I wanted to come on a new track with him that they were doing called "Boys Will Be Boys". Within two or three days I went down to the studio and did it, and it was released as a single about four months later. Then when Preston went into the Big Brother house it got more popular and it got a lot of fans that way.

Are you planning on doing any more stuff with them?
Ranking Jr: Yeah definitely. We're due to do something else very soon. They are writing their new album at the moment and I'm supposed to be linking up with them and getting something together - more in the writing this time because I just featured on the track last time.

You're very energetic on stage aren't you?
Ranking Jr: That's right yes - but I'm actually really, really chilled out when I'm off stage but as soon as I get on there the adrenalin rush takes over and I go absolutely hyper for an hour and a half!

And by the time you go on the crowd will have been dancing all day?!
Ranking Jr: Yes - they're either really pumped up or really knackered but somehow the energy of the music takes over.

Like most fans of The Beat I hope that Dave and Roger will let bygones be bygones and join forces again. Until then, those of you living in the UK are lucky to have Roger and Ranking Junior carrying the flame.
Posted by Marco On The Bass at 3:08 PM

this is really good thank you for putting it up! i love Ranking Roger and Ranking Junior! The Beat are amazing in my opinion, seen them twice now and hopefully a 3rd time coming up shortly :D !