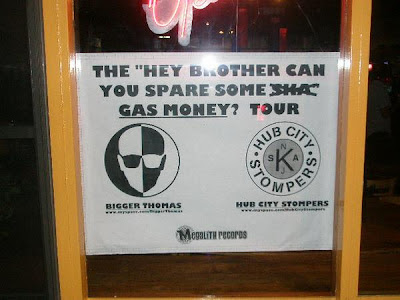 So a post about my band's road trip down to Knoxville, TN for Ska Weekend 2008. We headed out with our Megalith Records label mates and partners in crime Hub City Stompers (who include ex-members of Inspecter 7) for a few shows on the way down . We dubbed the tour "The Hey Brother Can You Spare Some Gas Money Tour" and with gas prices at $4.00 - $4.25 wherever we went it ended up costing us a lot. Luckily we sold a lot of CDs and a lot of t-shirts and we ended up breaking even.
The first stop was Fletcher's in Baltimore, MD but not before a band meal at Timbuktu which may have the best crab cakes I've ever eaten. Fletcher's was like many punk rock clubs we've played in our day: dark and dingy. We played a good set that warmed us up for the rest of the tour and then found out the club was stiffing the promoter. We waited around while the promoter and club manager yelled at each other for awhile and then the promoter did the right thing and paid us out of his own pocket. A few fans from way back (late 1980's/early 1990's) were in the house and let us know this was the first time they had seen us since then.
We made the long drive from Baltimore to Boone, NC the next day and had a run-in with the North Carolina State Police about 100 feet from the Boone town line. According to the officer our drummer John was doing 70 MPH in a 55 MPH zone. I'm not certain this was true. It likely had more to do with the out of state license plates on our van. We later heard that Boone is infamous for giving speeding tickets to out-of-staters, particularly northerners. After that bit of drama we met up with Hub City Stompers and Royal City Riot and loaded in to play at the Black Cat. 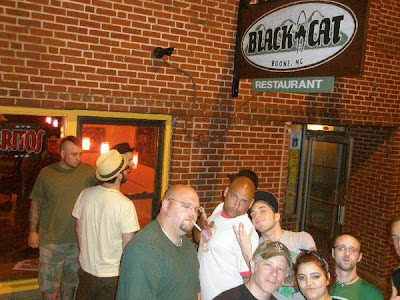 I was really impressed with the Royal City Riot guys. They played a great set that mixed traditional ska, reggae and soul and I have high hopes for them. You can check them out at their MySpace web site. Hub City Stompers kicked it hard and played a lot of new songs from their new CD to be called "Ska Ska Black Sheep." My new favorite is "Ska Train To Dorkville" which takes kids into ska punk to task for not knowing and respecting the true roots of ska music. We played an even better set than the night before and I felt we were warmed up for Ska Weekend. We got up early on Saturday and I took a turn behind the wheel as we drove to Knoxville. We passed through some very beautiful parts of the Appalachian Mountains and around some very winding and twisting roads and finally arrived in Knoxville. 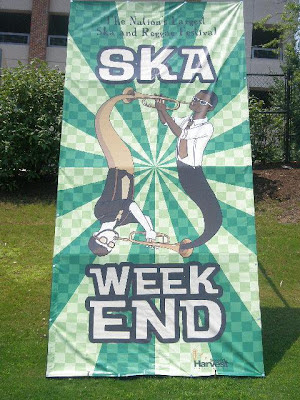 We set up our shared merch tent with Hub City Stompers and settled in for a few hours of ska punk which seemed to dominate the festival. Now I'm no ska traditionalist by any means but I have to be honest and say that I'm not a huge ska punk fan. And unfortunately a lot of the bands on the bill did very little to change my mind. Hardcore and punk with horns is not ska. 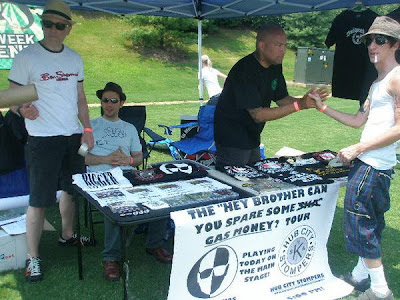 The bands who did make an impression: Royal City Riot (a better set than the night before), Green Room Rockers (These guys will be big and could take the mantle away from The Slackers as the best ska band in the U.S.), Hub City Stompers (enough said) and AKA:Rudie (who have been keeping the ska flame alive down south for as long as we have). We went on at 4 pm and played a 30 minute set that seemed to get the crowd moving. Our singer Roger made his usual impression by diving into the crowd and urging them to dance (which they did despite the heat). We also wore black arm bands to show our respect for our MC/Toaster Roy Radics who was unable to join us for the tour because his father had passed away. We missed him and it was a sad occasion but we played a great set in his father's honor.

The best part of Ska Weekend was the after party which was held at a club in downtown Knoxville on Saturday night. Green Room Rockers performed a great set of 60's and 70's ska and reggae covers and then turned the staage over to us. We played a long first set of originals followed by a shorter second set of 2-Tone era covers (Jungle Music, Tears Of A Clown, Monkey Man, Ranking Full Stop, Nite Klub) that featured Rob from AKA:Rudie, Ska Weekend promoter Ben Altom on trumpet, members of Royal City Riot and Hub City Stompers. It was a great way to end the weekend. We got a few hours of sleep on Saturday night and were on the road Sunday morning for the 15 hour drive home. 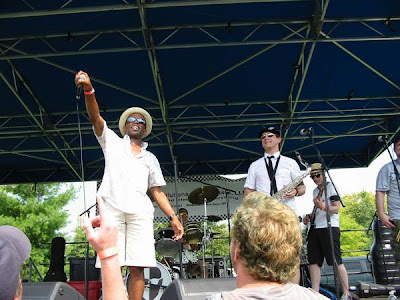 Roger gets the crowd going 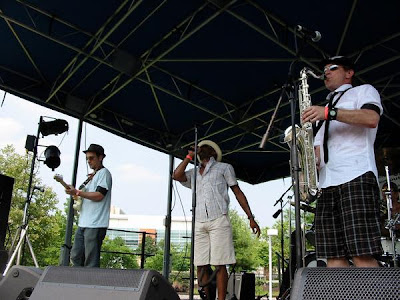 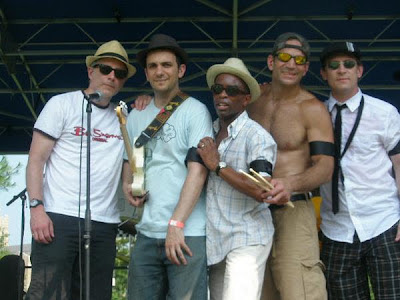 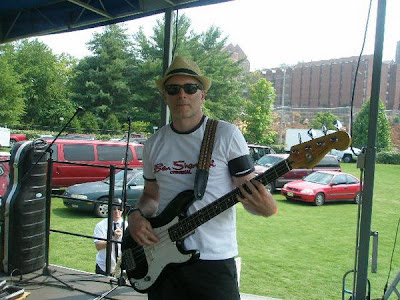 Marco On The Bass