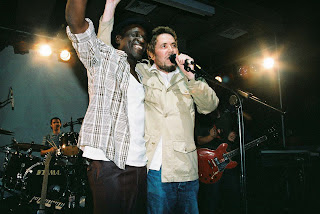 OK. I'm starting to believe there will not be a Specials reunion in 2008. Based solely on Jerry Dammers introduction of Neville Staple and his crack band during their live performance on July 7th at the Mean Fiddler in London as part of a Marxism Festival. The show also featured a DJ set by Jerry and a performance by Linton Kwesi Johnson. It sounds like there is still some real animosity between members. As part of introducing Neville, Jerry calls Terry Hall's manager a "Filthy, rotten capitalist" (which seems appropriate at a Marxism Festival) and says that Terry's manager doesn't want Jerry to be part of the reunion. Jerry also says that Neville is the only one in the band who wants him to be part of the reunion and won't do it without him. Following on Terry's solo show with Lynval a week earlier it would appear that factions have formed. This is not good.

Back to the music. Neville and his band perform a blistering hour long set of Specials songs and ska covers and Jerry joins them at the very end of the set. It's great to hear and watch, but I can't help but think that 7 original members of the band should be playing these songs together instead. Something so simple has been made so dificult.

Here is the video.