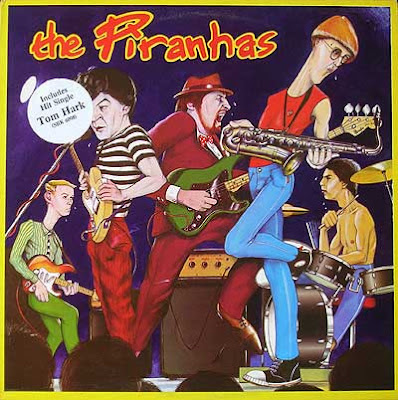 In my never ending quest to highlight unsung ska bands from the late 1970's and 1980's 2-Tone era I recently discovered The Piranhas. The quintet who hailed from Brighton were signed by Sire Records as their entry into the ska sweepstakes. The songs have a charming, idiosyncratic quality, and feature offbeat lyrics in uniquely neurotic numbers like "Getting Beaten Up," "I Don't Want My Body" and "Green Don't Suit Me." The music is eclectic ska with punk accents in the general vein of early punky ska numbers by The Beat and Bad Manners — though a number of the tracks fall well outside the genre, with one recalling spy-movie soundtracks from the '60s.

The band first came to prominence when DJ John Peel started playing their single "I Don't Want My Body" on his BBC Radio 1 program, but achieved their biggest success with their cover version of the South African kwela song "Tom Hark". With new lyrics written by the band's front man "Boring" Bob Grover, it was a Top 10 hit in 1980. According to an article about the band in The Mirror from 1999, the song was originally recorded in 1953 by a group called Elias And His Zig Zag Jive Flutes and is based on traditional South African folk music.

The Piranhas' saxophonist discovered the song in his mother's record collection and persuaded the band to do a version. Grover wrote the lyrics as the group travelled in the back of a van from their hometown of Brighton to a recording studio in London. "The original was an instrumental so we brought it up to date with some lyrics," says Grover. "I could say the words were deep and meaningful, but they don't really mean much. I scribbled them on an envelope in about an hour." Pop impresario Pete Waterman was executive producer on the single which was regularly played by Radio One DJ John Peel. Eventually, it sold 325,000 copies and reached number six in the charts in August 1980. It also became a popular chant among British football fans.

But The Piranhas' success ended almost as soon as it started, although they toured with The Pretenders, The Jam and Bad Manners. They were involved in an horrific road crash, in which their road manager died, and they spent 16 weeks away from the circuit. "Creative differences" forced them to split in 1981, although Bob Grover kept the band name and had a Top 20 hit a year later with the Pete Waterman-produced single, "Zambezi".

Here is the track list for their self-titled LP on Sire:

Getting Beaten Up
Pleasure
Do You?
Saxophone
Love Game
Tom Hark
Tension
Fiddling While Babylon Burns
Green Don't Suit Me
Something
Coffee
I Don't Want My Body

Password = rideyourpony
Posted by Marco On The Bass at 9:18 PM

I'm glad you wrote these guys up. I loved the b-sides to "Tom Hark," as well as "Love Games" (which I had on a Rock Against Racism comp). Somewhere, I even have an "I Don't Want My Body" badge. Although I must admit, when I found their full-length many years later, I felt like I'd already heard the best material on the singles.

Bought this album in US at a flea market in 1987. LOVED IT. Played a track from it every week on my college radio show. Finally thought to add it to my iPod in 2015.