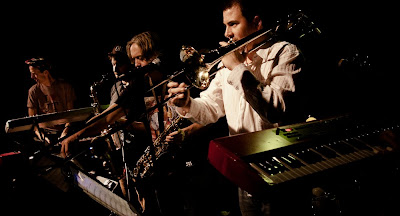 Have you been thinking about picking up a new iPad or maybe just a new set of ear buds for your iPod but have been putting it off? Well tomorrow night may finally be the night to head over to the Apple Store on 103 Prince Street here in New York City to do a bit of shopping as the Gowanus Reggae and Ska Society (G.R.A.S.S.) celebrate the recent release of their album 'G.R.A.S. S. on Fire' with a special 'iTunes Presents' in-store performance.

With the release of 'G.R.A.S.S. On Fire', this collection of eleven intrepid musician dedicated to exploring the sounds of classic ska and reggae bring a jazz perspective to Marley's seminal 1973 release, 'Catch A Fire', instrumentally interpreting the seminal album's music so that it retains all of its original passion and sincerity.

G.R.A.S.S features some of the finest players from Brooklyn's vibrant musical community, creating music with the spontaneity of jazz and a deep reverence for Jamaican rhythm. The band is made up of an ever-evolving group of players, including bassist J.A.Granelli, Nate Shaw on keyboards, Mark Miller on trombone, saxophonists Michael Blake, Ohad Talmor, and Paul Carlon, David Barnes on harmonica, Russ Meissner on drums and guitarists Tony Romano, David Bailis, and Brad Shepik.

The goal of the Society, says Granelli, who is the son of legendary drummer Jerry Granelli, “is to bring as many interesting voices to the music as possible." Nate Shaw adds, “the band is made up of jazz musicians who all share the same profound respect for the music of Jamaica. The love runs deep." G.R.A.S.S. formed three years ago—born out of what the musicians called “big ass playdates," at which they would gather at Shaw's house, along with wives and kids, to jam and just hang out. The 'Society' came out of those gatherings, as the rhythm section began to regularly focus on dissecting specific reggae songs in what Granelli calls a 'free form school of rhythm.'