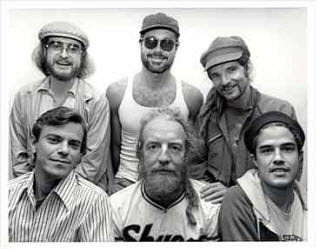 I could not be more excited to announce some big news! The legendary Big Youth (one of the original toasters and DJ's who ruled the early 70's reggae scene) has teamed up with leading American reggae band Blue Riddim Band to release a remix of the band's classic 80's reggae anthem 'Nancy Reagan'.  The song 'Nancy Reagan 2011 Remix - Voice Of The People' features Big Youth's classic DJ vocal stylings over the band's most well known rhythm. A limited edition 7' vinyl single will be released through Rougher Records as well as in digital format. The release date is set for May 3rd, 2011. Blue Riddim's latest album 'Tribute' has only been out a few short months, but has already made it  onto some 'Best Of 2010' lists including mine.

I connected with Blue Riddim Band bassist Todd 'Bebop' Burd who filled me on all the details. According to Burd, "Myself and my partner, Emily 'Goldie' Madison started Rougher Records last year. We released the latest Blue Riddim Band album 'Tribute' and also signed another Midwest reggae band RC Dub. Their album is due out this spring. Now we are releasing this single with Big Youth on the A side and a remastered version of the original 'Nancy Reagan' riddim on the B-side." Burd also mentioned that the band is working on a single with Bob Andy regarded as one of reggae's greatest song writers which is due out later this year.

Below is a short promo video of the single.

Blue Riddim Band hold a very special place in the history of American reggae music. This all-white band from Kansas City, Missouri have the distinction of being the very first American reggae band to be invited to play at Reggae Sunsplash. Their blazing set of ska and reggae covers and originals as dawn was rising over Jarrett Park on August 8, 1982 is legendary. They earned two encores from the crowd of 20,000 Jamaicans who were mesmerized by their 'blue eyed reggae.' Their Sunsplash performance was recorded for the LP 'Alive In Jamaica' released in 1984 which was nominated for a Grammy for best reggae album in 1985. The record's highlight is a blistering live version of 'Nancy Reagan'(see video below).

Nearly three decades later I'm amazed at how well "Nancy Reagan" has held up as an example of roots reggae from the golden era of rockers. The dub effects on the 12" single of "Nancy Reagan" were as mind blowing as anything being produced by King Tubby, Scratch Perry, or Mad Professor. Even now in the year 2011, the wry humor of "Nancy Reagan" rings true in our contemporary era of right wing greed and relentless hyper-capitalism. With brilliant lyrics including, "All my clothes are from the best designers/All my china is a perfect match', the song may be one of the most overlooked reggae rhythms ever recorded. The track was originally recorded at the Channel One studio in Jamaica in 1982 while the band was on the island to perform at Reggae Sunsplash and was released as an EP along with five other songs. 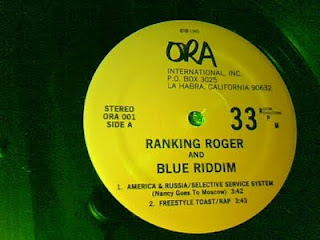 This is not the first time the song has been versioned.  In 1985 the 'Nancy Reagan' track inspired a young fan of the band living in California to use the track to create a protest song that would be critical of the ongoing Cold War between the U.S. and the Soviet Union and his view that it was being perpetuated by Reagan. Calling in a few favors, he was able to land the help of reggae enthusiast David Lindley, who mixed the "Nancy Reagan Re-Election Remix" side, and of Ranking Roger of The English Beat and General Public , who featured on "America & Russia/Selective Service System" and a free-style toast over the basic 'Nancy Reagan' track. Read more about that story and have a listen to the Ranking Roger track below.

The song 'Nancy Reagan 2011 Remix - Voice Of The People' remix featuring Big Youth will be available from Rougher Records on May 3, 2011. Make sure to pick up a copy!
Posted by Marco On The Bass at 9:22 PM

The Big Youth version of this track sounds pretty fantastic!