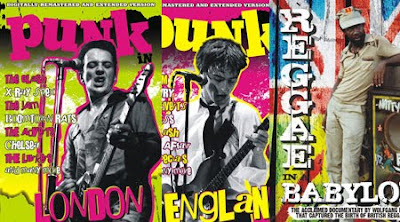 Wolfgang Buld’s trilogy of late 70's music documentaries 'Punk In London', 'Punk In England' and 'Reggae In A Babylon' have recently resurfaced on various websites for viewing in all their original DIY glory (though recently remastered and updated versions with lots of extra bonus material and footage are available for sale). As background, Buld was a film student in Munich in the late 70's when news of the UK punk scene reached Germany.  When the film school he was attending required some documentary features as part of his final course work, he set off to England in 1978 with a film crew in tow to see what was happening for himself. As it turns out, he was in the right place at the right time and in the matter of a few short years he had recorded footage for three distinct documentaries which are must see for any music fans of the era.

Of particular interest to MOTB readers will be the second and third installments of the series.  Filmed in 1980 'Punk In England' documents how the creative energy of 1976-77 era punk captured in the first film was inspiring bands to experiment with new sounds -- particularly ska and reggae.  The second installment is an important companion to 'Dance Craze' and 'Urgh! A Music War' showcasing The Specials performing 'Too Much Too Young', Guns Of Navarone' and 'Gangsters'.  It also includes some pretty incredible interview footage with The Selecter and recording the tracks 'Murder' and 'Too Much Pressure' in the studio. Buld also interviewed a rowdy Madness in a pub and filmed them playing ecstatic versions of 'One Step Beyond', 'The Prince', 'Swan Lake' (both highlighted by the Chas Smash 'nutty dance') and 'My Girl'.  The doc also features The Clash knocking out 'London Calling', 'Complete Control' and 'Police And Thieves' as well as The Jam, The Pretenders, Secret Affair and Ian Dury & The Blockheads all in their heyday.

This is a true 'punk' documentary and it has a 'you are here' look and feel. As such Buld provides no crawls to identify any band playing or to indicate who the talking heads might be (though fans of the era should have little trouble). Watch the entire doc below:

Buld's 'Reggae In A Babylon' provides a fantastic look at the birth of homegrown British reggae which was recently documented in the excellent 'Reggae Britania' series. Featuring performances by a very young Steel Pulse (circa 1978 without dreadlocks!), Jimmy Lindsay, Aswad and the Lover's Rock teen trio 15-16-17, the third installment in the trilogy is a natural progression from the first two films given the social and musical impact reggae had on punk and 2-Tone. What's striking is the sense of purpose displayed by the members of Steel Pulse.  These are serious musicians making really good music. They talk about being held back by limiting factors like reluctant DJs and outlets for bands. The answer is a system of records and soundsystem parties (which Buld gets on film) that allowed UK reggae fans to gather and hear the new music being made on a more underground level. Watch the entire documentary below:

I'd like to see/hear/read something similiar to this about what is now called "skinhead reggae". The stuff Madness listened to when they were kids circa 1973.

Hi Miles. Pick up a copy of the Madness bio 'House Of Fun'. Its chock full of that kind of info and its a great read.