John Lydon Of The Sex Pistols/PiL Is Your Reggae Selector! 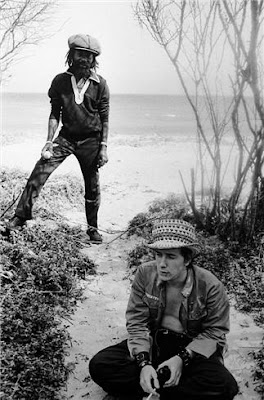 John Lydon (AKA: Johnny Rotten) is a huge reggae fan and his trip to Jamaica in 1978 with Don Letts following the break-up of The Sex Pistols to scout acts to sign to Virgin Records Frontline reggae label further solidified his reggae bona fides (that's Lydon with Big Youth in the picture above). In fact, Lydon and The Sex Pistols were so revered by the reggae community that while Lydon was in Jamaica, Lee 'Scratch' Perry reportedly recorded a 'version' of the Pistols reggae-tinged 'Submission'. It remains unreleased to this day.  During an interview Lydon gave to the Los Angeles Daily News a few years back he reiterated his love of reggae: 'Reggae to me is not an affectation. I heard it growing up in the council flats (the U.K.'s low-cost government housing). It's a way of life, it's not entertainment.'

In 2007, an undated, handwritten letter (circa 1978-80) that Lydon wrote back to a fan who had contacted him for advice on reggae was unearthed and caused quite a stir all around the music blogosphere (check original articles here and here). Apparently impressed by the fan's interest in reggae, Lydon wrote back (on very cool PiL embossed stationery!) and shared an extensive 2-page list of reggae artists he recommended.  The list stands the test of time and its a fantastic piece of musical history that further demonstrates the strong link between punk and reggae. Apparently Lydon was known for responding to particular pieces of fan mail he received: witness a letter he wrote to a 12 year old fan about the break-up of The Sex Pistols.

According to the PiL fan site Fodderstompf which helped publicize the letter:


As you will see the list includes the likes of Johnny Clarke, Augustus Pablo, Prince Jammy, Dennis Brown, Pablo Gad, Keith Hudson, Hugh Mundell, and many, many more…

It is notable that many of the Jamaican artists Lydon previously publicly name checked do not appear – such as Big Youth or Dr Alimantado – but lets make it CLEAR. This was a private letter between John Lydon and a fan. It was never meant to be seen by anyone else. It is not meant as a definitive list or as music-snob bragging rights.

However, Fodderstompf feels this list is a rare insight into John Lydon's (and PiL's) much discussed love of reggae; and deserves to be documented. It's hard to imagine any of the punk / reggae faker's coming up with anything like this… This is ain't no white man in Hammersmith.

While growth of the Internet and re-issues means a good deal of the music Lydon listed is relatively easy to get a hold of now, it was a totally different story in the late 70s.  The list shows a real insiders knowledge and taste, and a deep understanding of reggae. 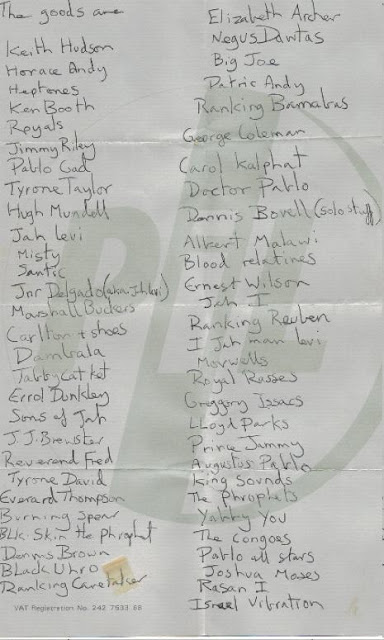 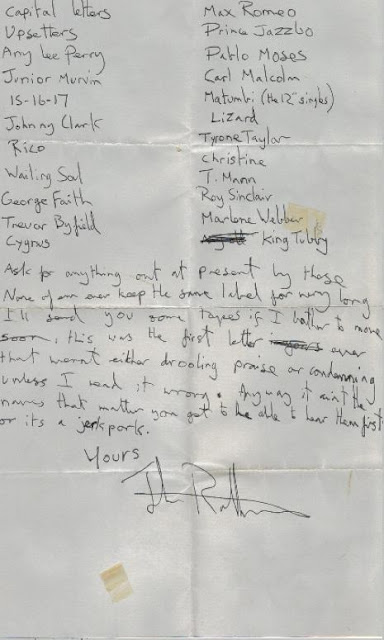 Further to Lydon's interest in reggae, he  famously appeared on BRMB, Radio Birmingham in July 1979 to pick and play some of his current favorite reggae tracks including songs by Black Uhuru, Gregory Isaacs and Ken Boothe. Read the transcript courtesy of Fodderstompf.
Posted by Marco On The Bass at 1:59 PM

Nice! This little anecdote tells so much not just about Lydon, but also about the way music and information circulated back then. Something was lost somewhere, even though it is also great that we have easy access to all this music...

Wow, this is truly amazing. There's like a good handful of peeps on here I hadn't heard of. Now I got Soulseek open and that list right next to me. Fun!