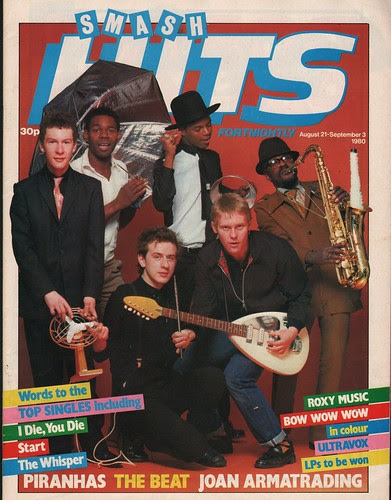 I attended Essex University in Colchester, England for half a year in the mid-80's.  In addition to developing a taste for curry, Cadburry's and custard, I also became a devoted reader of a plethora of music magazines available at the time including the NME, Sounds and Record Mirror, but my personal favorite guilty pleasure was Smash Hits.  While I often slogged through the esoteric and at times indecipherable prose of the former, I devoured the later. It provided a way to feel connected to bands that were popular and on the radio.  Despite its title and subject matter, the magazine served as the first job for many up-and-coming music journalists who later founded and edited Mojo Magazine and Q and one who later became a bona fide pop star -- Neil Tennant of the Pet Shop Boys.

I recently discovered a blog that rekindled my love affair with Smash Hits. Like Punk Never Happened - Brian McCloskey's Smash Hits Archive is a treasure trove of glossy pop memories.  The blog features several issues from 1978 and 1979 and a complete collection from January 1980 until July 1985 which are being posted in real time leading up to the 30th anniversary of the first publication (the blog is now up to March of 1981). I've already killed a few hours going through the archives which are a complete history in technicolor of the changing tastes and musical fads of British pop music from the late 70's and 80's. For the uninitiated, every issue of Smash Hits featured a cover, center spread, interviews, reviews and the famous lyric pages (which were definitely a boon to a Yank like me who was still struggling a bit with slurred Northern and Midland accents).

While Smash Hits still exists in name via a web site and special edition publications, the decision to cease regular publication of the bi-monthly magazine in 2006 came as revenues dropped as the audience of teens and young adults shunned the magazine in favor of the internet. An article in The Guardian from 2006 that eulogized the rise and fall of the magazine, called it the perfect media vehicle to chart a particular time and place in pop music history:


The period between the rise of Adam and the Ants and the collapse of Stock, Aitken and Waterman's "Hit Factory" empire may prove to be the last truly great pop era, in that it produced not just great pop music, but great pop stars. While the traditional music press, most notably the NME, became ever more verbose and sullen and rarefied in response - this was a time when it couldn't review the new Shakin' Stevens single without mentioning Roland Barthes, Wyndham Lewis and Ingmar Bergman's Sommaren med Monika - Smash Hits truly understood what pop music was about. Its tone was never fawning or respectful, but impudent, wry and occasionally merciless. Any kind of pomposity was held up to endless ridicule

While the archive will be of interest to anyone with a penchant for pop music that was made in the U.K. during the 70's and mid-80's (new wave and post-punk in particular), its offers a fantastic and detailed historical look at the rise of 2-Tone.  In fact, 2-Tone and ska/reggae oriented bands including The Specials, Madness, The Beat, The Selecter, Bad Manners, The Bodysnatchers, Dexy's Midnight Runners and more graced the covers and were profiled regularly in Smash Hits. The following issues are all worth checking out for the covers as well as the interviews featuring each band:

Below are a few interviews/profiles of The Beat, Madness, The Specials and The Selecter from the height of 2-Tone mania during 1979-1981. The archives are full of more like this.  Happy hunting! 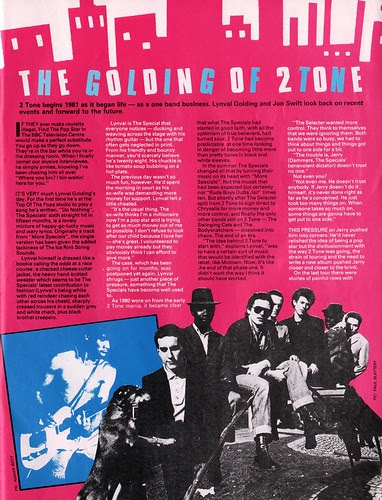 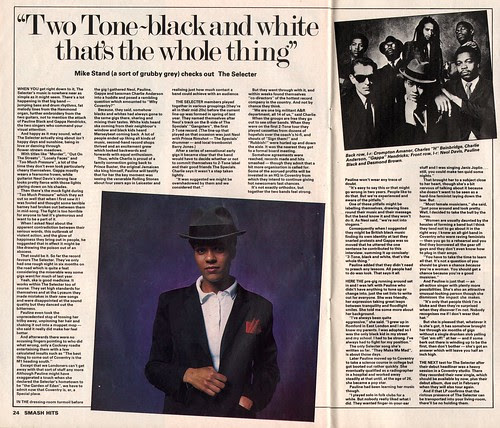 What a cool archive! Though they kind of dis The Clash's "London Calling" single, as well as The Beat's "Tears of a Clown" in the issue I looked at. Oh well, can't always tell a classic cut when you're under deadline!

Got lots of investigating to do here!

Ha! I noticed that too. Overall I'm impressed with their reviews and overall coverage of 2-Tone.

Very nice... I spent most of my lunch time in high school devouring columns and reviews form Flipside and Max Rocknroll, and ReSearch books... And Murder Can Be Fun! Anyone remembers (or even ever read) the "Death in Disneyland" issue?
Hey, sorry, that had nothing to do with the original post, but somehow I remembered...
Greetings from Buenos Aires.