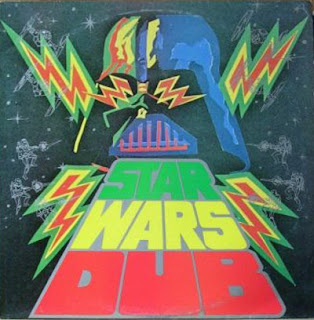 The Star Wars movie saga has had such a significant impact on modern popular culture, that references to the main characters and themes of the films are casually made in many English-speaking countries with the assumption that others will understand the reference. This is also true of Jamaica where references to popular culture have always been a cornerstone of ska, rocksteady and reggae -- and Star Wars is no exception to that rule! In fact a reggae version of the 'Star Wars' theme recorded by Rico Rodriguez in 1977 may have been the first in a never ending line of Star Wars themed musical covers.

First a bit of history.  Because Jamaica didn't ratify the Berne Convention for the Protection of Literary and Artistic Works until 1994 copyright was not an issue and could not be enforced.  This led to the recording of a huge number of cover songs and reinterpretations. Many early 60's Jamaican artists recorded instrumental ska versions of popular American and British music, such as Beatles songs, Motown and Atlantic soul hits, movie theme songs, or surf rock instrumentals.  There is also long-standing musical tradition in Jamaica of using songs and music to comment on popular culture.  In fact many early ska and rocksteady songs have titles that reference current events of their place and time.  The Skatalites were well known for naming many of their early songs after news items.  For instance, 'Christine Keeler' (video below) is named after the woman at the center of 'The Profumo Affair', a nasty political scandal that damaged the British Government in 1962.   Other topical songs recorded by the band include 'Fidel Castro' and 'President Kennedy'. Ansell Collins also recorded 'Nuclear Weapon'.

Now back to our story.  The year was 1977 and the very first Star Wars film had just been released. In true Jamaican musical tradition, Rico Rodriguez graced 'The Federation' with a limited edition release of  'Ska Wars (Star Wars)", his ska/dub trombone take on the John William’s classic released by Island Records later that very same year. The song was recorded during the sessions for his iconic 'Man From Wareika' album. True to the film the song includes plenty of space-like dub sound effects. Coincidentally late 70's UK ska rockers Arthur Kay & The Originals also released a singled titled 'Ska Wars' in 1979, though it did not reference the movie or theme song.

With possibly one of the greatest album covers of all time, the ultra rare and mysterious 'Star Wars Dub' released in 1978 on the Burning Sounds label by producer Phil Pratt is a total fanboy masterpiece that combines two subjects that attract their fair share of obsessives: ‘Star Wars’ and ‘Dub reggae’! While original vinyl copies are eagerly sought after by Star Wars completists, the music on the album is among the best dub released in the late 70's. Pratt who was a sometime singer earned his reputation as a producer working with a number of notable singers including Horace Andy, Ken Boothe and John Holt.  Little is know about the 'Star Wars Dub' album though its possible it was recorded by The Revolutionaries  (featuring Sly & Robbie on drums and bass) who were the house band at Channel One Studios. Below are three tracks from the album.  Play them loud and may the force be with you!

Nice, takes me back to the Janitors Against Apartheid song, 'that breakfast pastry' where they do a mashup of all the Star Wars songs in 3rd-wavish, ska punk-esque style.

I designed this cover in a bedroom in my family home in South London, my "business" partner probably did a bit on it to but I it's mostly my effort. The label owner, can't remember the name gave us overnight to do it. You can tell by the quality that it was done in an afternoon. It was delivered to the printers the next day.

About 1979 the radio was playing the star wars theme music in dub reggae, but i cant find any trace of this anywhere. Perhaps you may know who recorded it. At first I thought it may have been Scientist dub but I dont believe it was.