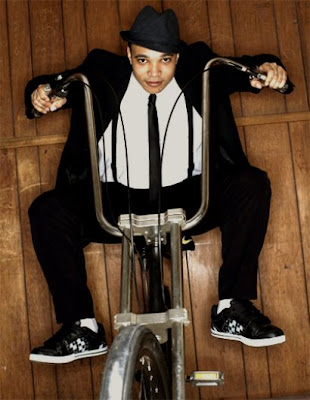 One of the new features of this blog in 2011 will be to highlight current ska and reggae artists that you might not be familiar with, but who deserve your attention and recognition. The next artist that I want to profile is Wayne 'Lotek' Bennett. His debut solo album 'International Rudeboy' seamlessly combines reggae and ska fueled guitar riffs and bass lines with reggae-inspired hip hop beats and witty cockney lyrics from the Jamaican-born Londoner who recently re-located to Melbourne, Australia. Lotek initially gained recognition as the producer of U.K. Hip Hop artist Roots Manuva's 2009 Mercury Award-winning album 'Speech Therapy.'

'International Rudeboy' features a selection of self produced dubs complete with live horns, trombone, guitar, keyboard, melodica and bass via a ska, dancehall and dub-fused sound system vibe. Highlights include 'Dreader Than Dread' (featuring Jimmy Screech) which is a scorcher and kicks off the album with a mash up of hip-hop and reggae in a dub style.  Its followed by the 'Rudest Dude' which has one of the catchiest choruses on the album and features a great mix of 70's era reggae with a memorable roots horn line (the track is garnering airplay in Australia!). ''Mile High Dub' reflect Lotek's globetrotting experiences (he used some of the award money from the Mercury Award to travel through Eastern Europe where he recorded and produced hip hop and dance artists). Lotek takes listeners on another trip around the world with the title track 'International Rudeboy', where he illustrates his musical journey from rejection to acceptance and he ends the album with 'Rudest Dub' which brings the album full circle.

Below is a video of the track 'The Rudest Dude' from the album which includes some great archival footage of Bunny Lee and King Jammy from the 1970's that Lotek spliced in giving it a great old time look and feel.  The original video that Lotek used is taken from the Delroy Wilson song 'Dancing Mood' is just below. Note that Lotek went as far as to dress like Wilson and to recreate the studio booth he is singing in to look just like the one Wilson is using.

You can stream the album below and purchase it directly on Bandcamp: