The Selecter Featuring Pauline Black and Gaps Hendrickson To Release New Single 'Big In The Body, Small In The Mind' 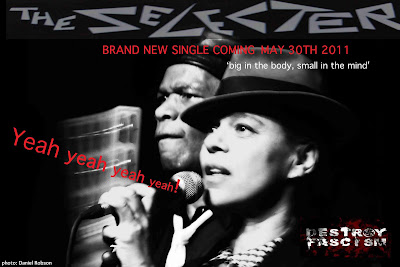 2-Tone fans everywhere have reason to celebrate!  Pauline Black and Gaps Hendrickson's version of The Selecter has just released a sneak preview video promoting the release of a brand new single 'Big In The Body, Small In The Mind' ( a cover of the Woody Guthrie song 'Fascists Bound To Lose') which will be released on May 30th, 2011. The song will be performed live for the first time during the band's headlining performance at the upcoming Strummercamp Festival 2011 on Sunday May 29th (the festival also features headlining shows by the UK Subs on Friday May 27th and Geno Washington & The Ram Jam Band on Saturday May 28th).  In addition to touring, the band are also slated to release a cover version of Amy Winehouse's 'Back To Black' (which rivals the original version in my book) later this summer and Black will also release her autobiography 'Black By Design' on August 4th (which is already available for pre-sale through Amazon.com).

It will be just like 1981 again as The Specials and both versions of The Selecter (Neol Davies' version of The Selecter is also planning to tour) crisscross the U.K. and Europe this Summer and early Fall. Below are tour dates for the Black and Hendrickson's version of the band. Note the highlighted dates for single releases as well as Black's book launch.

Indeed it is! Thanks for the heads up!