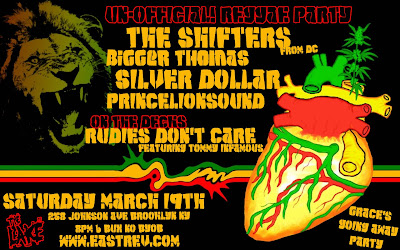 Nothing to do this weekend? Then join me and my Bigger Thomas band mates in heading over to The Lake in Bushwick, Brooklyn for the Un-Official Reggae Party this Saturday March 19th. The show is a slightly scaled down version of the Dirty Reggae Parties thrown regularly by the Brooklyn Rocksteady crew.  Its also a sending off party for the lovely and talented DJ Grace of Spades who is heading down to The Big Easy for a few months!

The show features a diverse line-up of Northeast ska and reggae bands including The Shifters from Washington DC who are a female-fronted 8-piece playing 60's inspired rocksteady and skinhead reggae, the old school 2-Tone ska of my band Bigger Thomas, Silver Dollar from New Brunswick NJ who combine ska, jazz, reggae, blues, rocksteady, funk and soul together and Princelionsound who performs as a Sound System styled DJ. And if that's not enough ska entertainment for you, the show features Rudies Don't Care with Jah Point and Tommi Infamous (ex-Bomb Town)  on the decks.

The shows at The Lake are unique and may come as close to the original blues dance environment of late night house parties or after-hours held all over London.  If you've never been, The Lake is a second floor loft space a few blocks from the subway, amidst several lonely (at least at night) blocks of warehouses and industrial shops--if you didn't know which metal door to open and stairs to climb, you'd probably never find this place (or suspect what the hell was going on inside!). My blogging pal Duff Guide To Ska sums up a show at The Lake quite nicely:


What's wild about this underground venue/arts space is that it looks and feels pretty much like the way it was at an illegal loft party/squat back in the 80s (but instead of Bushwick, it was Manhattan's East Village/Lower East Side)...and the mix of punks (yes, there were impressive mohawks), skins, and everyone else in black was pretty much the same then as now. The black box performance space (which could fit 150--maybe--was up front with a small stage, great sound system, dance floor, and two raised platforms lining part of the room for sitting or standing on. The remainder of the venue consisted of a long, wide hall (just past the kitchen, where they sold beer); a room for lounging in the back; and a door leading to some outdoor metal stairs down to the "backyard."

Here is video of a recent show from The Lake that includes Rudies Don't Care performing:

Not convinced yet? Give each band a listen below:

Directions:
Take the L train to Montrose and walk on Bushwick Ave. until you hit Johnson Ave and make a left.

Take the J/M train to Flushing Ave. Walk on Flushing until you hit Bushwick Ave. turn left. Walk on Bushwick Ave. until Johnson and make a right.
Posted by Marco On The Bass at 8:26 AM