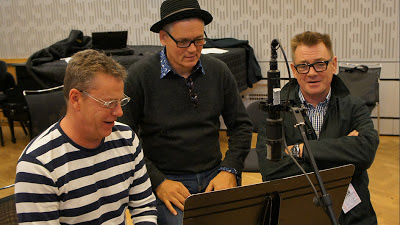 Madness’s excellent 2009 concept album, The Liberty Of Norton Folgate, about London's rich past as a melting pot of immigrant cultures, has inspired a new, one hour BBC Radio 4 play starring band members Suggs, Mike Barson and Chas Smash. The drama will be broadcast for the first time in the U.K. on Saturday, February 9th.

The radio play is based around Bangladeshi immigrant characters who have owned a cafe in London's Norton Folgate for thirty years. But now the local governing council have served a demolition order, and the developer of the site turns out to be the father of their son's girlfriend.

The play, which took over two years to develop, was written by Mark Davies Markham who has shared the back story about it on a blog post published on the BBC web site:


Suggs, of legendary ska popsters Madness, is married to a brilliant singer. She’s Bette Bright of Deaf School fame. I’m at a Deaf School reunion gig - I see Bette and seize the moment to thank her for letting me use two of her songs in a musical I had written for The Liverpool Everyman. Flattered, she invites me to have a lager shandy with her old man, Suggs. Hunched up tight in a cosy corner of The Hope Street Hotel I pitch an idea to the cheeky chap. "BBC Radio 4. A play created around a classic concept album. What do you reckon?" Madness in the Radio 4 studio   "Hang about," barked the bard of Camden Town. "I bet you been to Bowie for Ziggy Stardust?" Spooky and uncannily true. "And he turned you down?" "Er. Well, his management did." "Pink Floyd for Dark Side of the Moon?" The man has a crystal ball. Nay two. "And now you want Madness to let you loose with your grubby maulers on our classic, critically acclaimed, mega-selling The Liberty of Norton Folgate?" OK, make that three. One for luck. "Absolutely, old son..."

We discussed how this might work. I would not only need his approval but that of the rest of the band too. And, as luck would have it, The Liberty of Norton Folgate was the perfect concept album to go back with to my producer Jeremy Mortimer. The next stage was to find out what inspired the album. After conversations with Suggs and Carl Smith (aka Chas Smash) I found out.  At the heart of it are the positive elements of immigration to London’s Spitalfields. How generations of immigrants have contributed to the area to make it the vibrant, unique place that it undoubtedly is.

The play airs at 2:30 CET time on Saturday February 9th in the U.K.  It can be streamed live outside the U.K. on the BBC's web player here.
Posted by Marco On The Bass at 2:42 PM