Rare Live Footage Of Madness Pre-Cursor Band The Invaders From 1976-78! 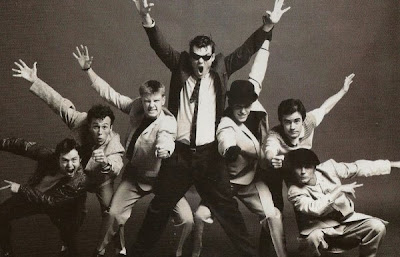 Very rare, live footage of The Invaders, the pre-cursor band to Madness has recently come to light.  Suggs, Chris Foreman, Mike Barson and Lee Thompson along with original members Gary Dovey on drums and Gavin Rodgers on bass are all seen playing and dancing in the 46 second color clip.  Sadly the footage is silent, but the band appear to be performing at a house party since Barson is playing an upright piano. The footage is likely from sometime in 1976-78.

The Invaders (also known as The North London Invaders), was formed by Barson, Foreman, and Thompson in 1976. By 1978, the band had changed their name to Morris and the Minors and had added Suggs, Mark Bedford on bass, and Dan Woodgate on drums to the group. Later in 1978, they changed their name to Madness, in homage to one of their favorite Prince Buster songs.

Incredible! This is very rare indeed...no matter for the missing audio as I can remember somone of the Nutty Boys in some interview admitting that at that time they were far from being great musicians. ;-)

its was filmed at Kerstin Rodgers house. It was her Dads birthday she was Barsos girlfriend and here brother is playing the bass. It was super 8 no sound