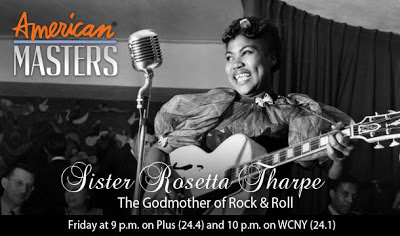 In honor of Black History Month, PBS (the American equivalent of the BBC) tonight will air American Masters: Sister Rosetta Tharpe: The Godmother of Rock & Roll. If you have an interest or passion for music, you do not want to miss this program. Appropriately enough, the documentary is narrated by Pauline Black, lead singer for The Selecter, who is an influential musician in her own right.

Tharpe was one of the most influential gospel singers in America in the '30s and '40s, and she put her stamp on the blues and big band music as well. In the '50s, she was an enormous influence on many musicians who started playing what became rock and roll, including Chuck Berry, Elvis Presley, Jerry Lee Lewis and Little Richard. Her talent as a guitarist also impacted Jimi Hendrix, Pete Townshend and Eric Clapton. The special includes archival footage and interviews. Check out a preview below: