The Song That Put Reggae on The Map In The U.S Turns 40! 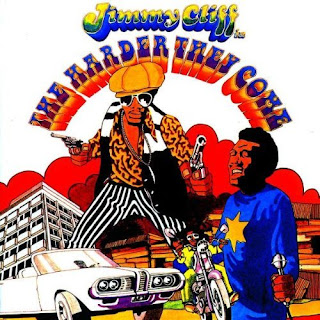 The Wall Street Journal has an excellent piece about the 40th anniversary of the release of the Harder They Come film and sound track, released in February, 1973.  The article includes an incredibly detailed interview about the song's development and its recording in Jamaica with Jimmy Cliff, who composed and sang the title song (and starred in the film), bassist Jackie Jackson, and guitarist Hux Brown who played on it. Read the interview here.


The first development of my song is actually in the movie—when the guitarist and I are rehearsing a song in the church. That's an early draft of "The Harder They Come." The rest of the music came fast. When I have a title, the rest always comes very fast. I'm quite good at melodies.

The lyrics came from my past. I grew up in the church and had always questioned what they were telling me. Like the promise of a pie in the sky when you die. The second verse about oppressors trying to keep me down kind of reflected my own life—coming out of the ghetto in Jamaica and fighting the system. I wanted the song to have a church feel and to reflect the environment I grew up in—the underdog fighting all kinds of trickery.

The release in the U.S. of 'The Harder They Come', (a movie that required subtitles so that American audiences could follow the dialogue) had an impact far beyond its modest take at the box office. While the film had a cultural impact and developed a strong cult following in the years following its release, it was the movie soundtrack which captured the hearts and minds of like minded people across the country introducing reggae to a wider American audience. In fact, the movie can be credited with giving rise to the first American reggae band -- The Shakers -- who were musical pioneers playing reggae when it was an odd, foreign sound to most Americans born and raised on rock and roll.

The soundtrack of 'The Harder They Come' captured reggae at the moment it entered its own golden age at the start of the 1970's -- with a variety of styles, rhythms and exotic lyrics. It included songs by Cliff, The Maytals, The Slickers and others -- soulful ballads, upbeat rockers and even songs that quoted scripture and preached peace. The film became a primer for Americans about reggae music and the Jamaican experience. According to an essay in The Criterion Collection, a film publication, 'The soundtrack of 'The Harder They Come' is something like the Sgt, Pepper’s of reggae—one of the hippest and most memorable collections of Jamaican music ever recorded."
Posted by Marco On The Bass at 2:43 PM