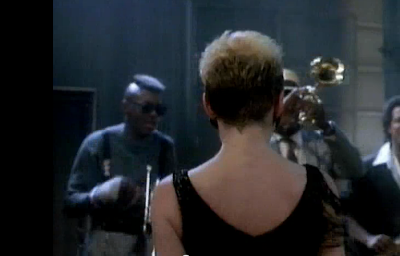 There is a great interview with Norwood Fisher, bassist of Fishbone in the New Miami Times that is essential reading for fans of the band. The story includes some great band anecdotes, including the fact that singer Angelo Moore and trumpeter/singer Dirty Walt made cameo appearances in the 1985 Eurythmics video Would I Lie To You. Look for Dirty Walt playing his pocket trumpet in the horn section and catch Angelo in a blink or you'll miss shot near the end of the video.

Fisher also shared that when he was 8 years old he traded a weight set he had gotten for Christmas to his cousin for a bass guitar, bass amp and record collection:


"My cousin came over and said, 'You ain't gon' lift them weights,'" Norwood remembers, snickering. "He said, 'I'll trade you my bass, my amp, and I'll throw in this collection of rock records I ain't gon' listen to no more.' And it had Jimi Hendrix, Jefferson Airplane, Mountain, Chicago, the first Funkadelic, and a bunch more.

"For a long time, I hadn't seen that cousin. But a couple years ago, we had Thanksgiving at his house, and he said, 'I guess you put that bass to good use.' And I was like, 'Thanks for giving me my life man. I love my life.'"