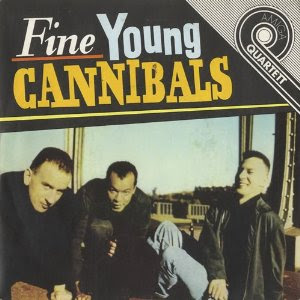 The Tube was an innovative and cutting edge music television series, which ran for five seasons from 1982 to 1987 on Channel 4 in the U.K.. The show was presented live by hosts Jools Holland and Paula Yates, and was an incredibly important showcase for many emerging 80's bands.

I was lucky enough to see The Tube regularly while living in England in 1986 and I still get misty eyed at the mention of it.  It was responsible for introducing me to a slew of great bands.  Indeed, Bono of U2 called it ‘the best rock ‘n’ roll programme on TV.’ And it was. The Tube was a very important outlet for many performers, and provided a turning point in the careers of many of them.  Paul Young made his TV debut on the show in 1983. The following year, Madonna made her British TV debut on the show.

For Fine Young Cannibals performing live on The Tube in 1984 was instrumental for introducing the trio of Andy Cox and David Steele (ex-members of The Beat who had broken up in mid-1983) and their new singer Roland Gift (formerly of Hull ska band The Akrylykz) to the British music press and ultimately the U.K. music buying public. Up to that point the band had been turned down by every record label they had approached and their manager John Mostyn (who had previously managed the The Beat and who booked the first 2-Tone tour in 1979) had to use some old school bluff and bluster to get the band some much needed print and broadcast publicity. Watch Mostyn discuss his clever strategy in the video below.

The band's fortunes really took off after Mostyn booked them on The Tube for their debut television performance in late 1984. Check out this very rare and fantastic footage of the band performing Don't Ask Me To Choose, Johnny Come Home and Move To Work which all later appeared on their eponymous 1985 album. Its fascinating to watch the audience, who had never seen or heard of the band prior to their performance, warm to them as the set progresses. You can see a band and its career coming together before your eyes.

The buzz around the band grew to a fever pitch after a self produced video the band shot in a bare studio in Birmingham in late 1984 for Johnny Come Home began airing regularly on The Tube.   Fine Young Cannibals signed a deal with London Records a few short weeks later.

how do those guys dance and play at the same time?

The bassist David Steele was given the nickname "Shuffle" for his odd herky jerky dancing while playing!