Vocalist for The Congos Lives In Babylon, Long Island! 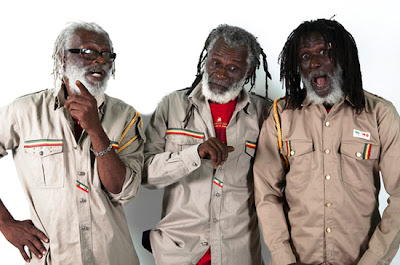 The New York Times has an excellent profile on Watty Burnett, the baritone vocalist for The Congos, whose 1977 album Heart of the Congos is considered one of the greatest roots reggae albums of all time. It turns out that Burnett, who originally worked for producer Lee Perry as a session vocalist and musician at his Black Ark Studio along before joining Cedric Myton and Roydel (Ashanti Roy) Johnson to form The Congos, has lived quietly in Long Island, New York since 1980.  Read the article here.

The article contrasts Burnett's quiet life on Long Island (when not on tour with The Congos (who recorded a critically acclaimed new album Icon Give Thank in 2012), Burnett works as an electrician, records music on his own and occasionally performs with a local Long Island reggae outfit called Noah’s Arc) with his life as a vocalist for the world renowned vocal trio.


For a dreadlocked Rastafarian, Long Island took some getting used to. Mr. Burnett remembers a trip to Freeport from Manhattan on the Long Island Rail Road, accompanied by the bass player for the Congos, Tony Allen.

“When we got to Queens, the conductor said, ‘This is Jamaica, last stop Babylon!’ ” he said. “We got really angry. We thought, ‘This guy’s messing with us!' "

Recorded over a span of three years, Heart Of The Congos features a who's who of musicians including Ernest Ranglin, Sly Dunbar, Mikey Boo, Boris Gardiner, Geoffrey Chung and Winston Brubeck who were members of The Upsetters band. ‘Fisherman’, the most famous song by The Congos and the opening track from Heart Of The Congos, is well known and loved enough to be considered an absolute classic within the relatively large field of vocal reggae.

An article from last summer in The Quietus plumbs the mysticism and allegories of the track:


Drop the needle onto ‘Fisherman’. The drums have all been bounced over to one channel on the TEAC, causing a wicked amount of degradation in the sound; the opening snare hits have been wrested of all harshness and clarity; then the reverb sees them crumble away into darkness. These are the abyssal depths of the track. Plumbing these waters are the basslines, one fuzzy and immersive, the other squelching and funky, carving out yet more three dimensional space (two different bass players were used on two separate days of recording - if this was an accident, it was a happy one). The delicately phased guitar lines sparkle above this, like sunlight on a calm sea surface, dappling the space below. The voices arrive staggered, creating further space, Watty’s rumbling bass and then Roy’s clear tenor. They may sing about the sea-bound man in the third person, but really it's The Congos themselves who are the fishermen, and the listeners the fish. They are, as the bible would tell you, the fishers of men. And this is evangelical, churchical music… just perhaps in more of a Rasta style than we had been previously used to.

The song starts with an exhortation to a Rasta fisherman - who already has three children, with another on the way - to bring back enough food for his family, before making a direct comparison to the apostolic fishermen Simon (aka Peter), James and John who have countless hungry “children” to feed (“lots of hungry belly pickney ashore – millions of them”). The Congos, being based in a fishing port, are keen for people to realise that this is a parable, and throw a concrete suggestion into the lyrical mix: that the fisherman might actually provide for his family by going to see Quaju Peg, the collie man, for some of his fragrant produce to sell. The song ends with the Congos urging the fisherman to reach higher ground because rain is coming, perhaps the forewarning of an apocalyptic event comparable to The Flood – a theme which is returned to again and again later in the album. The lyrics plumb depths under their deceptively calm surface, just like the music.