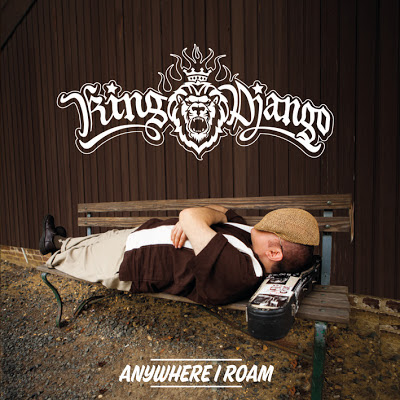 True to its title, the recently released 12 track King Django album, Anywhere I Roam, available on Stubborn Records, is a beautiful musical meditation through a variety of Jamaican musical genres (ska, early, roots and rub-a-dub reggae and roots rocksteady) on what it means to truly commit to life as a musician and an artist and the tensions (economic, romantic, familial) that choice can create.

Recorded in various studios around the world with an international cast of collaborators -- Obi Fernandez, The Void Union, The Forthrights, The Scrucialists, Regatta 69, Pannonia Allstar Ska Orchestra (PASO), Mr T-Bone, The Soul Captives and Motha Nature --  the ten originals and two covers (a rollicking ska meets New Orleans blues reworking of The Clash's Career Opportunities with lyrics updated for the Great Recession of 2008 and a stirring Skatalites-like version of The Police's Every Breath You Take that finds the emotional pain in the track that Sting originally wrote as a bitter revenge tale) detail the ongoing conflict between the freedom of life on the road (sex, drugs and ska and reggae) and the tug of memories, family, home and lost love.

The freedom and liberties that an itinerant life provides form the backbone of many of the songs on the album. On the slack Hey Gyal, he duets on a tasty toast with Motha Nature about the joys of sex. He's in high spirits on the album's title track, on which he jauntily chats about his prowess on the mic and his joyful life as a musician backed by The Forthrights (Anywhere I roam, that’s where I make my home).  On One Finger Django grabs the DJ mic and backed by The Soul Syndicate, chats over a hypnotic Black Uhuru-style track warning: One finger chop off the next one.

Conversely, Django acknowledges and accepts that the artists life can take a toll on a soul that yearns for love, home and the spiritual and emotional comforts that they can offer.  Backed by Switzerland's The Scrucialists on the gorgeous roots rockers Do You Really Love Me, he sings of the loneliness of the road: There’s people all around but I’m feeling so alone/ I’m counting the hours ‘til I can come home. The search for romantic love is balanced by the search for family in the emotionally moving Where Can I Go? Backed by PASO, Django recounts a walk around Budapest as he searches in vain for the ancestral home of his family members who perished during the Holocaust.  Django finds the emotional core of the album on Aiming, a bittersweet rocksteady track about the regret and morning after misery of a drunken night out.  Backed by The Void Union and joined by Obi Fernandez on vocals and harmonies he sings (Aiming/To drown all my sorrows).

With Anywhere I Roam,  King Django has demonstrated again that he is among the very best purveyors of ska and reggae working today. The fateful decision he made to pursue the artists life may at times be a hard road to travel, but the payoff musically is one that we are lucky to benefit from as listeners and lovers of Jamaican music.

Stream a preview of the entire album below.