The Next Electric Avenue Show: The Reggay Lords and The Copacetics on Saturday, February 23, 2013 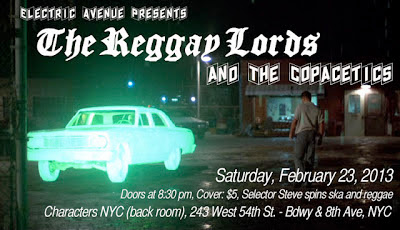 The next Electric Avenue show will kick off on Saturday, February 23, 2013 with a rare Manhattan appearance by The Reggay Lords (a who's who of Brooklyn ska and rocksteady musicians including  members of The Slackers, The Forthrights and The Hard Times, who don powdered wigs and 18th century style garb!) and the NYC debut of Providence, Rhode Island-based ska and reggae band The Copacetics. Doors are at 8:30 pm and the cover is a super low $5!

Electric Avenue is a partnership between myself and my fellow New York City ska blogging pal Steve Shafer (Duff Guide To Ska). We have teamed up to present monthly ska and reggae shows at Characters NYC, a midtown Manhattan Irish pub (243 West 54th Street, between Broadway and 8th Avenue in Manhattan) with a big back room ideally suited for live music.

Since last fall, we've been undertaking this labor of love--doing it for free (the bands split 100% of the cover, nobody else takes a cut)--to support ska bands and their fans, and have some fun in the process. Electric Avenue shows already have featured some of the best acts on the ska scene, including King Django, The Snails, The Frightnrs, Destroy Babylon, Bigger Thomas, Beat Brigade, Doomsday!, Los Skarronerros, The Pandemics, The Scofflaws and The Bullbuckers. The Facebook Electric Avenue event page can be found here. And take a moment to "like" the Electric Avenue FB page, so you keep up on our shows.

So who are these Reggay Lords and what has moved them to mix among commoners like us?  I was given an audience with Lord Nugent who responded to my inquiry with the following answer: "We are Reggay Lords, we find little the need to explain ourselves. Tidy thineself and make ready for a Mighty Murderous Sound."

Upon further inquiry, I learned that the band includes:

In fact, The Reggay Lords was originally formed by Jah Point as Jah Love and The Valentinians -- a reggae cover band he put together to perform Lover's Rock songs.  Within the last two years, the band settled on a line-up, changed their name and started to write original songs. The band's debut album will be released digitally on Whatevski Records later this month.  Below, stream Only Money, from the forthcoming album and watch video of the band performing last summer at the Stubborn Records 20th Anniversary show at the Knitting Factory in Brooklyn.

REGGAY LORDS - Only Money by Crazy Baldhead on Mixcloud

Grounded in Ska and Reggae, The Copacetics add healthy doses of Soul, R&B, Jazz, Pop, Doo Wop, and Calypso to their mix for a “dancing is mandatory” sound.  Below stream a few of their songs and watch them play live.

Get Band email for free at ReverbNation.com