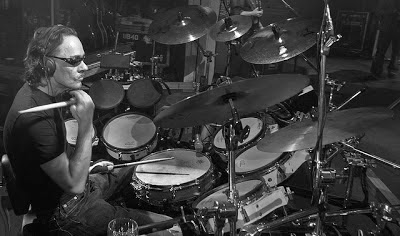 Though many fans of UB40 consider their first album Signing Off to be their best, I have always believed that their follow-up recording, Present Arms is its equal, featuring two of the band's best songs -- One In Ten (which I have written about before) and Sardonicus.  The album remains a hallmark because it successfully combined the pure, technical characteristics of true Jamaican reggae with a British pop influence and topicality that captivated audiences when it was released in 1981.

As a bassist, I have always been impressed with UB40's rhythm section of drummer James Brown and bassist Earl Falconer.  Indeed, Brown's syncopated drumming has been the backbone of UB40’s sound since day one. Self taught like all his other band mates, his performance on the band's early recordings (before they embraced syths and drum machines) is quite remarkable.  Horace Panter of The Specials no less, has name checked Brown (along with John Bradbury of The Specials) in his memoir "Ska'd For Life" as one of the best white reggae drummers ever.

Though UB40 has always shared the song writing credits equally, its well known that Brown penned the lyrics to many of the band's best songs from their early albums including One In Ten and Sardonicus. In addition to his musicality, Brown has been described as the thinking man's musician and a talkative anarchist. He's always been the bands readiest and most radical commentator on social and political matters. He also has a very diverse knowledge and taste in movies which informed his song writing including the understated, yet powerful Sardonicus.

As quick background, risus sardonicus is a a medical condition featuring, sustained spasm of the facial muscles that appears to produce grinning. A case of risus sardonicus features in Sherlock Holmes story The Sign Of The Four, Batman (just take a look at the Joker's sardonic grin!) and the 1961 horror film "Mr Sardonicus" produced and directed by William Castle. It tells the story of Sardonicus, a man whose face becomes frozen in a horrifying grin while robbing his father's grave to obtain a winning lottery ticket.

According to Brown, a passionate film buff, the lyrics he wrote use the imagery from the film as a jab at then U.S. President Ronald Reagan ("Many men are fooled by his smile /His superficial grace his charm his style "):


"It was based on a little known cult movie called 'Mr Sardonicus'. It's about a man who has a hideous grin frozen on his face. At the time it was aimed at Ronald Reagan.  It was made by William Castle, a well known director of cheap, bizarre low budget 'shockers' in the fifties and sixties.  Usually starring Vincent Price. He was like a cross between Ed Wood and Roger Corman. Totally mental, but with a wicked sense of humor and good technique. He wasn't known for his subtlety. I suppose his most famous films are 'The House On Haunted Hill' and 'The Tingler'. For that movie they rigged the cinema seats to deliver an electric shock. That incident has become movie folklore."

The Reagan link was made subtly again via a movie title, when UB40 released a dub version of the album Present Arms In Dub (the very  first dub music album to hit the UK top 40) and Sardonicus was retitled Kings Row after the 1942 Reagan movie in which he plays the character, Drake McHugh, who has both legs amputated by a sadistic surgeon, played by James Coburn. When he comes to following the operation, Reagan's character screams, "Where's the rest of me?" Indeed...

Hi Marco,
Interesting peice on UB40, thankyou, but I must put you right on one thing. while it is true that Jimmy was the lyricist for Sardonicus and I in 10 on the Present Arms album, he most certainly did not write the lyrics for Food For Thought on the Signing Off album. I brought those lyrics to the band.
Regards,
R Campbell UB40.

Thanks for the comment Robin! Im honored that you visited my humble blog. Duly noted and corrected!

Check out UB4D tribute to UB40 guaranteed to blow your Sox off Marco!