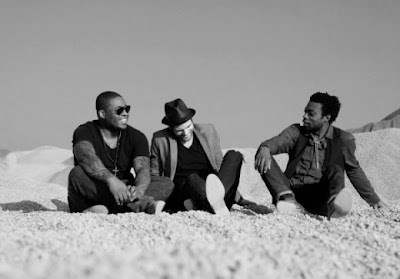 Canadian reggae rock trio Bedouin Soundclash arrive in New York City tonight (after an around the world tour that took them from Shanghai, China to India and the U.K.) to promote their new record 'Light The Horizon' which was just released here in the U.S. in late October. The band who are a huge draw in their homeland (where they have had several songs chart on Canadian commercial radio, enjoyed a Juno nomination for album of the year and performed a high profile slot during the Vancouver Winter Olympic games earlier this year) as well as the U.K. (where they have charted several songs) has mostly flown under the radar here in the U.S. despite playing support for No Doubt on their 2009 U.S. tour. I believe that they could possibly change with their new record which was recorded in Philadelphia and produced by King Britt who toured with Digable Planets.
I was originally drawn to the band by their sound which seems to mix elements of The Cure (when the were a 3 piece) with both The Police (particularly lead singer Jay Malinowski's vocal inflections that recall a more soulful and rough voiced Sting) and The Clash. Despite some unwillingness on the band's part to identify themselves as a full out ska or reggae band (they call themselves 'street soul') it sounds to me like their heart lies in reggae. While many other rock and pop acts continue to dabble in ska and reggae, Bedouin Soundclash sounds more like a reggae act dabbling in rock. Not only do they maintain a traditional reggae style rhythm on many tracks but they imbue their music with a genuine soulful edge that's sadly lacking in a lot of newer ska bands today. The band also has a lot of high profile admirers including Bad Brains bassist Darryl Jennifer who produced their breakthrough album 'Sounding A Mosaic' and reggae legend Vernon Buckley of 70's reggae duo The Maytones who has been known to perform with the band.
Here is video for the song 'Mountain Top' the new single from 'Light The Horizon' and my favorite song 'Rude Boy Don't Cry' from 'Sounding A Mosaic'


You can listen to tracks and purchase the new album 'Light The Horizon' on Amazon.com: