The Specials Announce 2011 Tour Dates of Europe and U.K. 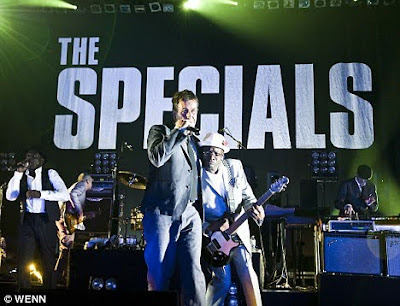 Great news for fans of The Specials! The band today announced 23 tour dates throughout Europe and the UK that are slated to kick-off next September in Amsterdam. According to The Specials Facebook page the tickets for announced dates are expected to officially go on sale at 9am on Friday December 3rd, 2010.

At the moment there are no U.S. tour dates confirmed or announced. This past summer the band cancelled a free show scheduled in New York's Central Park due to visa issues. According to sources inside the band, the problem is that the U.S. government won't issue one of the band members a visa to enter the country. The band's first performance in the U.S. in 29 years was on the Jimmy Fallon Late Night TV show back in April. However toaster/singer Neville Staple was notably absent. The band later cancelled other U.S. shows leading some to speculate that Staple was the focus of the visa related issues.

Heather Augustyn's recently published book 'Ska: An Oral History' confirms that Staple is the focus of the visa issue. The except below is taken from her book. "In the U.S. on April 8, 1998, while on tour to promote 'Guilty 'Til Proved Innocent' at the Metro in Chicago, Staple was arrested for battery against another band's lead singer who, according to Robert Preston (lead singer of The Cupcakes) told Staple where to put his equipment and Staple argued with him over it. Staple then hit Preston over the head with a bar stool sending him to the hospital. According to some reports, Preston called Staple a racial epithet. But rather than explain the alleged racist comment to a judge, Staple chose not to show up for his court appearance and has never returned to Chicago because their is a warrant out for his arrest. Even though he continued to live in California for a number of years after the arrest, today, back in England, he has been denied a visa to the U.S. unless he goes back to Chicago to settle the warrant.'
Unless The Specials management is able to settle the visa issue, fans in the U.S. may sadly miss out again on seeing the band. Here's to hoping the visa issue is sorted out and the band does make it to these shores in 2011!

Below are the band's announced tour dates:

Thanks as always for the news, Marco!

I can't believe there's still fallout from the "Chicago" incident.

Back in '98, I interviewed Neville and Horace in NY, just days after the Chicago event. If I recall from that discussion, the "band equipment" was actually the Specials' tour bus. They drove up in front of the club to unload and had a bit of a scuffle over the "you can't park here" message. I'm sure a lot of band members can relate to that.

I remember also, the police and the club were kind enough to let the Specials play the show and do their whole set, before they formally charged him. :-)

Thanks very much for clarifying what happened during the 'Chicago' incident. Sadly it seems to be preventing the band for undertaking a US tour.

It seems in this post-9/11 environment touring bands and musicians are being caught up in US Government red tape about keep our homeland safe.

I know the band's management has spent considerable time and effort to work this out with the US Government (who also prevented Astro from UB40 from touring because he was caught with a small amount of marijuana).

I'm hopeful this gets worked out so fans of the band here in North America finally can see them perform before they call it quits.

Sigh. I think that The Specials not being able to play NYC's SummerStage this past August because of all of this ridiculousness is The Bummer of 2010.

I hope they will be able to come over and do a proper tour of the US before they're done for good.

And what about Madness? C'mon over, Nutty Boys!

Yeah! What about Madness doing even a small U.S. tour?

Bah.. If they can't settle this visa issue I wouldn't be against them having Neville on a satellite stream like they did with Astro.. I just wanna seem them again!! :<