Don't Read That, Read This! - 'House Of Fun: The Story Of Madness' Arrives At MOTB Household! 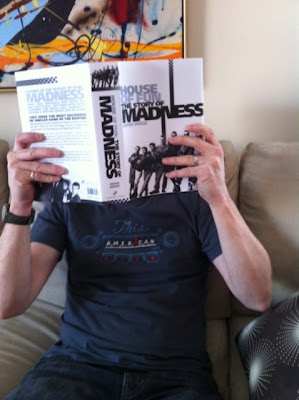 At last! 'House Of Fun: The Story Of Madness' (all 502 blessed and joyful pages of it!) arrived via Royal Mail from the U.K. at my humble abode here in the Big Apple today. I've already dug in to the tome and hope to have a review up in the next few weeks (given the book weighs close to 3 pounds it may take a bit longer give or take a few long subway rides where I may make some headway).
The book received a 4-star lead review in the latest issue of MOJO, so its almost hard to believe its taken until now for a proper bio on the band to be produced. According to several U.K.-based reviews, 'House Of Fun' is actually the first official, band-approved Madness biography ever. Several similar books have been started, deleted or abandoned over the years and, by the author John Reed's own admission, this one too was delayed by as much as a year (no shock really, given the seven strong personalities within the group. It’s a miracle they ever managed to reach a consensus to approve publication of the book!). The book covers the band from their roots in North London through their rise as part of 2-Tone and their fall and disintegration in the late 80s and subsequent rise again via the Madstock festivals and new recordings. The book is authenticated by candid interviews Reed conducted with those who've worked with Madness over the years.
If you are a Madness fan, this is your new bible! So open up those wallets and purses and shell out for a copy. If you've already read the book, then share your thoughts with a comment! The good news for Madness fans in the U.S. is that the book is now available for sale from Amazon.com in the U.S. Click the link below:

Just ordered mine! I finally had some money to do it. Can't wait to get this package as I got a couple of other 2 Tone related books coming as well. It's a ska reading frenzy as I started reading Ska: An Oral History by Heather Augustyn too.

Nice one Mr Lawless! Enjoy the book. We'll have to compare notes when we both finish it.