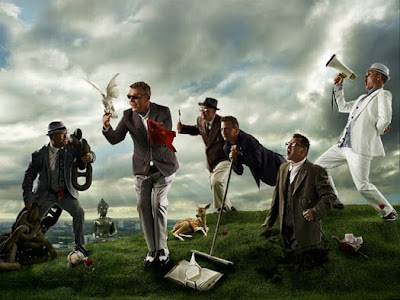 I was able to gather a few choice updates from the kick-off of the Madness 'Do Not Adjust Your Nut' tour in Blackpool on Friday night from the good people at Madness-Central (your one stop shop for all things Madness). Apparently, true to their word, the band performed two new songs, including 'Blue and Black' (composed by Mike Barson) and 'Big Time Sister' (words by Lee Thompson and music by Chris Foreman). It's been said they're both bouncy numbers. As such I was able to get my hands on a video of the band performing an untitled new song just last week during rehearsals for the tour. Its hard to tell if this song is either of the new songs performed, but I would say this one is pretty bouncy. Have a look and listen:

The band also performed their classic 'Driving In My Car' in Blackpool last night which apparently has not been a staple of the set list recently. You can watch and listen to it below courtesy of guitarist Chris 'Chrissy Boy' Foreman's ax cam (which is a Flip Video he attaches to the fret board of his guitar.)

To celebrate the kick-off of the tour last night in Blackpool, the band is sharing a souvenir of their live performance of 'Lovestruck' available as a free MP3 download. All you need to do is provide your e-mail address. Go here to grab the song.

More updates and free songs as the tour goes on.
Posted by Marco On The Bass at 4:17 PM