Get Ready for Madness! - Band Biography 'House Of Fun: The Story Of Madness' Is Out Today & UK Tour Kicks Off November 26th 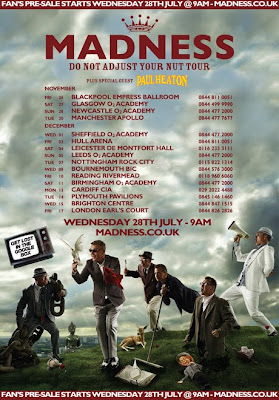 Madness fans rejoice! Today, the 502-page tome 'House Of Fun: The Story of Madness' is finally released. And just as you finally finish reading the book sometime later this month, the band is primed to kick-off their 'Do Not Adjust Your Nut' tour of the U.K on November 26th in Blackpool. And if that's not enough Madness for you, the band is readying an as yet unnamed new LP for release in 2011. Fans attending upcoming tour dates may get a chance to be the very first to hear some of these new songs which will be the band's first since 'The Liberty Of Norton Folgate' was released in 2009. The cherry on the cake is the release of the 'Googlebox'. Just what is the 'Googlebox' you ask? Have a look at the video below and find out for yourself:

Here is a promo video for the 'Do Nut Adjust Your Nut' tour. Get your tickets quickly as the tour is likely to be a complete sell-out.

If you are planning to see the band on tour, the band wants your picture. According to a post on the band's blog, its a tradition for pictures of fans at the gig to appear on the big screen during 'It Must Be Love'. This time, the band is asking fans to send in their pictures before you go to the show. Their goal is to get as many of them up on the screen as possible. If you plan to go and want to see your mug up on the big screen then send it off to info@madness.co.uk with the name of the gig you are attending in the subject line (images need to be high resolution, but no files bigger than 5mb).
Finally, for those among you who are still unable to satisfy your cravings for all things Madness related, Suggs and Mike Barson appear on the relatively new Audio Bullys album 'Higher Than Eiffel' that was released earlier this spring. Audio Bullys are a electronic duo who have been embracing their inner rude boys more and more and their once big beat sound has morphed into more ska-and-punk-driven house beats. If you want to skip right to the Madness tracks, Suggs and Monsieur Barso feature on 'Twist Me Up' and 'Goodbye'. The Madness connection goes back a bit. Suggs collaborated with the Audio Bullys in 2005 on the track "This Road" from their Top 40 album Generation. I imagine its what Madness could sound like if they embraced their inner Audio Bullys.


If these songs strike a chord with you then you can hear the full album in stream at the Audio Bullys official MySpace page.
You can buy a copy of the new book 'House Of Fun: The Story of Madness' at Amazon.com: